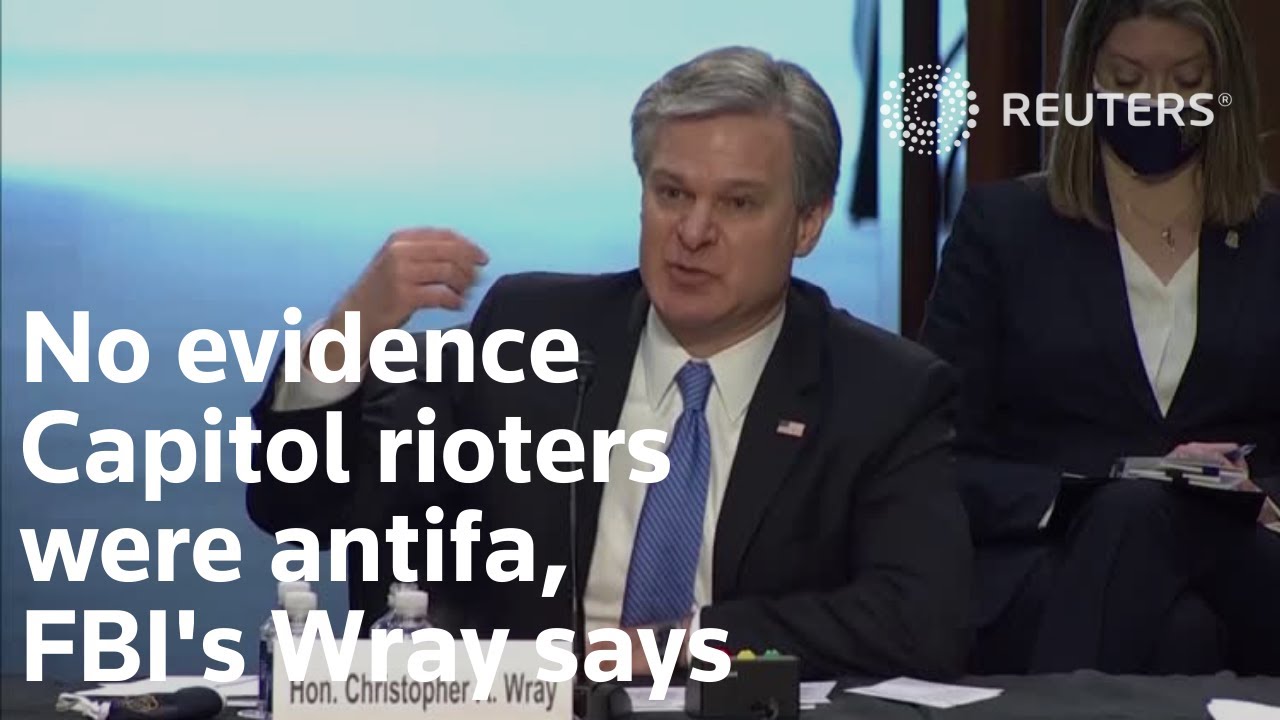 In testimony to the U.S. Senate Judiciary Committee, Wray also told lawmakers that the Federal Bureau of Investigation views the actions of the rioters on Jan. 6 as "domestic terrorism," and vowed to hold them accountable.

"We have not to date seen any evidence of any anarchist violent extremists or people subscribing to antifa in connection with the 6th," he testified, referring to the loosely organized anti-fascist movement.

"That doesn't mean we're not looking and we'll continue to look, but at the moment, we have not seen that."

Tuesday was Wray's first testimony in Congress since the attack, a failed bid to block Congress from certifying Democrat Joe Biden's November election victory. The attack occurred immediately after Republican Trump, in a speech near the White House, exhorted his supporters to march to the Capitol, having repeated his false claims that the election was stolen from him.

The Justice Department has charged more than 300 people with crimes ranging from conspiracy to attacking police and obstructing Congress. The rioting left five dead.

At least 18 people associated with the far-right Proud Boys have been charged and nine people tied to the anti-government militia known as the Oath Keepers are facing charges they conspired as far back as November to storm the Capitol to prevent Biden from becoming president.

Wray revealed that since the attacks, the FBI has also seen instances of "foreign adversaries" who have been "leveraging the events of Jan. 6 to amplify their own narratives" and push propaganda.

He did not provide further details, saying he could not do so in an unclassified setting.

Supporters of Trump have repeatedly made unsubstantiated claims the rioters were actually fake Trump supporters who belong to antifa. They have also repeated Trump's false claims that the election was stolen due to widespread fraud.

Wray told lawmakers on Tuesday this narrative was false.

To the contrary, he said, a number of the rioters belong to far-right militia movements, or were motivated by racial ideologies — but none to date appear to belong to any left-wing groups.

The anti-government militia extremists, he noted, appear to be the "biggest bucket" that is trending as the FBI examines the backgrounds of the rioters.

Wray said he stood by comments made by former Attorney General Bill Barr, who had infuriated Trump after the election when he said the Justice Department did not have evidence of any widespread election fraud.

"We are not aware of any widespread evidence of voter fraud, much less that would have affected the outcome of the presidential election," Wray told lawmakers.

The FBI has yet to arrest any suspects in the death of Capitol Police officer Brian Sicknick, or for pipe bombs that were discovered outside the headquarters of both the Republican and Democratic national committees.

The FBI has obtained a video that shows a suspect spraying bear spray on police officers, including Sicknick, according to a law enforcement source familiar with the investigation.

The suspect has yet to be identified by name, and it is still unclear if the bear spray contributed to Sicknick's death.

Wray said he cannot disclose a cause of death, and Sicknick's death is still under investigation.

In a newly unsealed search warrant, investigators say rioters carried weapons inside the Capitol including tire irons, sledge hammers, tasers, bear spray and, in at least one case, a handgun with an extended magazine.

Investigators including the FBI have come under scrutiny over why more was not done to protect the Capitol ahead of the attack.

The day before, the FBI's Norfolk, Virginia, office distributed a raw, unverified intelligence report which warned that violent extremists intended to disrupt Congress.

Wray told lawmakers the intelligence was shared with other law enforcement agencies three different ways, but acknowledged he personally did not see the report until a few days later.

As to why other top law enforcement officials did not see it, Wray said: "I don't have a good answer to that."

Senator Richard Blumenthal, a Democrat, said to Wray: "What I don't understand is why this ... raw intelligence didn't prompt a stronger warning and alarm."