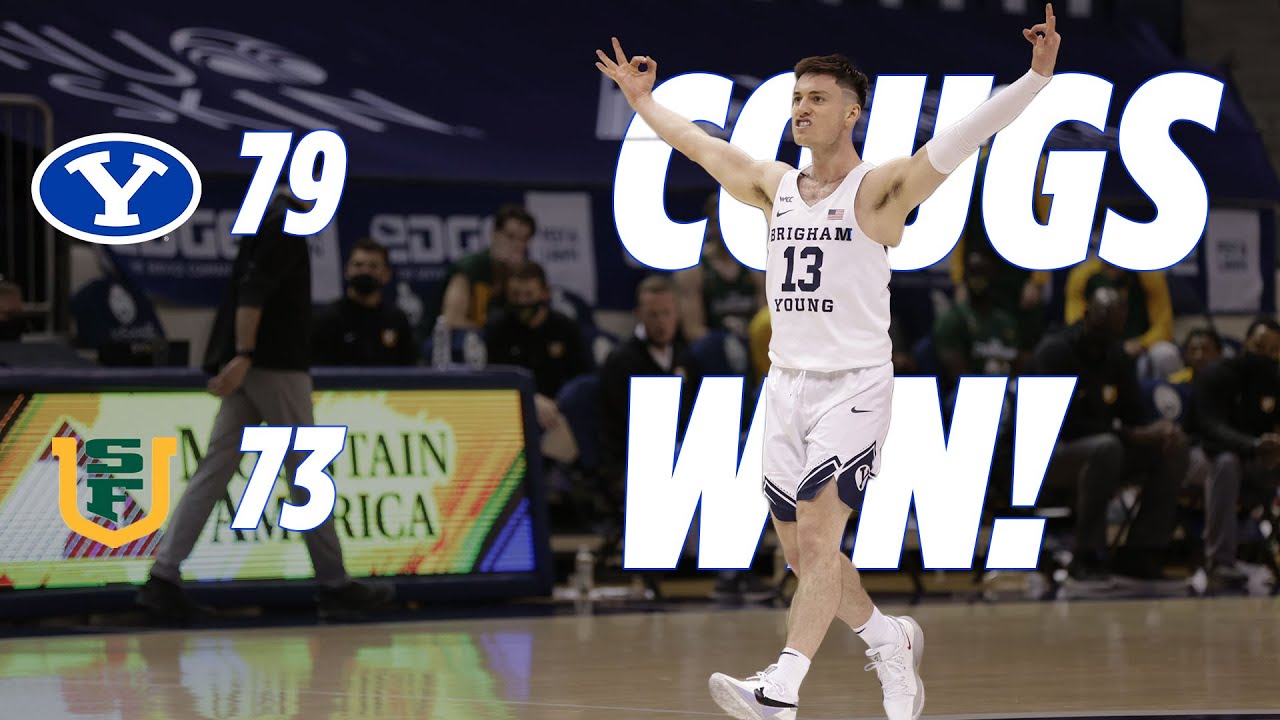 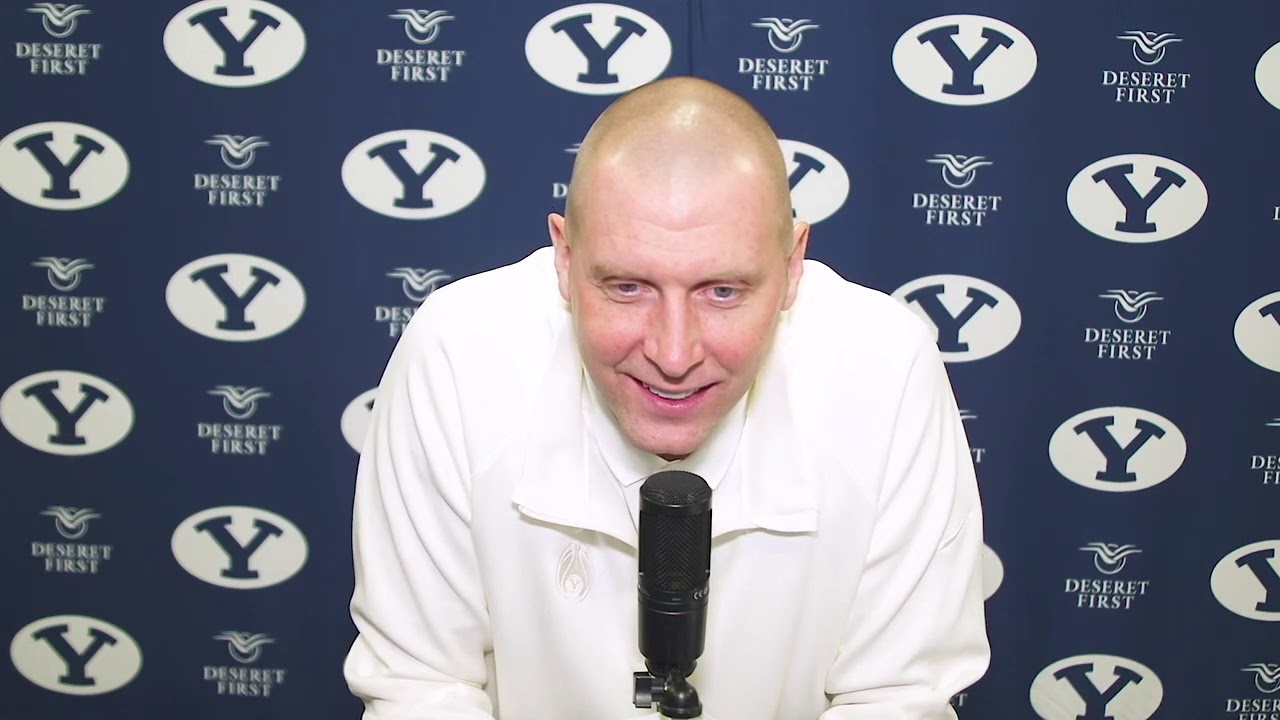 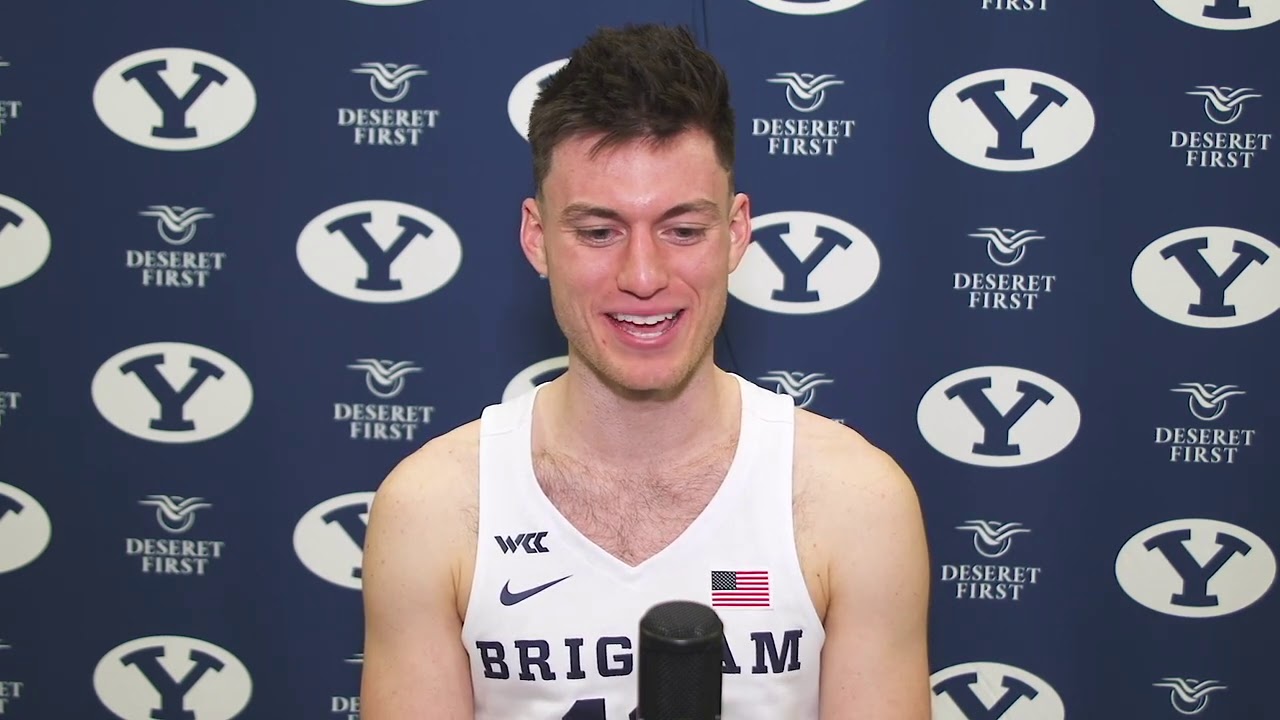 None were as big as Caleb Lohner's high-flying dunk with 3:10 left in the first half.

That's when Spencer Johnson, the American Fork product who forced a turnover and led the break, saw the freshman who prepped at Wasatch Academy charging towards the hoop. Nearly every one of the 1,750 fans in the Marriott Center began to stand up even before Lohner got the ball.

Johnson didn't even try to take a shot.

The BYU bench was on its collective feet before the pass was finished.

They all saw Lohner coming.

Just a week removed from a career-high 19 points at Pacific, Lohner took the dribble handoff from Johnson just inside the free throw line, and without thinking, the 6-foot-8, 230-pound freshman soared over a pair of trailing USF defenders and thunderously slammed the ball through the hoop to the delight of the crowd.

It was, without hesitation, the loudest the Marriott Center has been in the 2020-21 season.

Lohner sent the crowd to its feet in the first half. Alex Barcello kept them there.

Lohner had 13 points and seven rebounds, and Barcello collected a career-high 29 points, including a school record 7-of-7 from 3-point range, to go along with five assists and three rebounds to help the Cougars pull away from San Francisco 79-73 Thursday night to collect their third straight win in front of a reduced capacity crowd of 1,750 openings for the first time all season.

From A to B — or in this case, A to C — the Cougars won their fifth game in six tries and have only lost once to an opponent not named top-ranked Gonzaga since Dec. 12.

"Alex is gnarly, dude. It was so fun," Lohner said. "Man, he's good — and he was hitting shots. It was super fun to be on the court with him. It's fun to be in the background, seeing him in practice and seeing it translate in a game.

"The dude is a stud. I love that dude; he's a great leader, a great teammate. But it was awesome."

More importantly, though, was the senior point guard's assist-to-turnover ratio: five dimes with just two turnovers, leading a BYU squad that had 12 and forced seven of their own.

"He had zero turnovers (late in the second half), because as soon as he caught it, he shot it and couldn't miss," Pope joked of his senior point guard from Arizona. "That's a huge performance from Alex Barcello — and I mean in protecting the ball. His ability to protect the ball and not turn it over down the stretch was the most important thing."

Gideon George added 11 points and six rebounds for BYU, which improved to 18-5 and 9-3 in the West Coast Conference. Brandon Averette supplied 10 points and five assists, and Matt Haarms had 6 points, eight rebounds and four assists for the Cougars, who assisted on 11 of 13 made baskets in the second half.

Jamaree Bouyea had 16 points, four rebounds and four assists, and Julian Rishwain added 25 points and five rebounds for the Dons (10-12, 4-8 WCC), who were outrebounded 35-29 in their fifth consecutive loss.

Khalil Shabazz hit his first field goal of the game, a 3-pointer with 4:30 remaining, to cap an 8-0 run that pulled USF within eight, 65-57. But Barcello responded with his career-high sixth 3-pointer out of the under-4 media timeout to spark a 7-2 run and help the Cougars pull away for good.

"He had zero turnovers, because as soon as he caught it, he shot it and couldn't miss," BYU coach Mark Pope joked of his senior point guard from Arizona.

"That's a huge performance from Alex Barcello — and I mean in protecting the ball. His ability to protect the ball and not turn it over down the stretch was the most important thing."

Every time the Dons tried to rally — and they certainly did — Barcello was there to halt them.

The senior from Chandler, Arizona, had his most productive game in a BYU uniform, and set a program record for consecutive 3-pointers in a game without a miss that had stood since Brock Zylstra tied Nate Call's 1991 record with his own 6-for-6 effort in 2012.

It was the kind of ephemeral experience the Cougars have come to expect from Barcello in his two seasons in Provo — even if most fans have been unable to see it live during the controlled environment of the 2020-21 season.

"I always knew Alex is a bucket. He can go off any given night," George said. "We trust Alex; he's the captain of the ship, and a great leader leading the way. You saw it on the court tonight.

"Alex will do Alex, every given night."

The magic started early, too — when Barcello didn't miss a shot during shootaround (at least, according to Pope, who never exaggerates those things, as BYU fans and media have come to know in his two seasons in Provo).

But during pregame shootaround, Barcello nailed six straight during one drill, then turned toward his teammates and shrugged.

"The guys asked if I had missed a shot, and I was just shooting," he recalled sheepishly. "It's funny; I had that feeling coming into the game, and thankfully I was able to continue that. I'm glad I didn't shoot all my makes in the shootaround."

Barcello hit his second three while the Cougars held USF without a field goal for nearly five minutes, highlighting an 8-0 spurt that put BYU back in front 26-20 with 6:48 to go.

Lohner knocked down a pair of first-half 3-pointers, but turned the game on its head with his high-flying handoff dunk from Johnson that caused the largest crowd in the Marriott Center this year to erupt with 3:10 left in the half.

Lohner had a game-high 13 points and five rebounds at the break for the Cougars, who shot 67% from the field in the first half, drained 6 of their final 7 shots, and outrebounded the Dons 16-7 en route to a 41-33 halftime advantage.

"After Spencer got the steal, I was yelling 'give it to me' at him. And he did," Lohner said with a grin. "It was fun.

"This is the first time playing in the Marriott Center with more than 200 people in it. The crowd went crazy. I was all smiles."

The Cougars held the Dons without a field goal until Rishwain's 3-pointer with 16:12 left in the second half, a 7-2 run that included George's 3-pointer to stretch the lead to double digits, 46-33.

BYU stretched the lead as high as 13 in the second half, and kept USF within at least two possessions the rest of the way.

The Cougars wrap up the home schedule Saturday against Saint Mary's. Tipoff on senior night is scheduled for 8 p.m. MT on ESPNU.