SALT LAKE CITY — Jennifer Woznick, a fifth grade teacher at Meadowlark Elementary School, described to a cheering crowd of other teachers, students and parents what she called examples of recent "bullying" from Utah lawmakers.

Woznick quoted Sen. Dan McCay, R-Riverton, who — while debating a bill, SB107, that was originally seen as a way to push the Salt Lake City School District into returning all students to in-person learning amid the pandemic — said, "I guess in some ways we took the school district to the alley and broke their kneecaps."

"Is that the language used by a concerned elected official for the students of a city he is not even elected to represent? Or a bully?" Woznick asked the crowd that had braved the frigid February cold to gather on the steps of Utah's Capitol on Wednesday.

"A bully!" the crowd, organized by the Salt Lake Education Association, shouted back.

"The answer is obvious," she said.

Then Woznick pointed to Sen. Todd Weiler, R-Woods Cross, who's sponsoring SB107, which has since been altered to focus instead on requirements surrounding "Test to Stay" protocols and requirements that in-person learning be offered at least four days a week.

Woznick called Weiler "another legislative bully" who only represents a "sliver" of Salt Lake City's School District in Rose Park. She criticized him for sponsoring SB107 and its original "punitive measures" that would have required the State School Board to reallocate a portion of per-pupil funding from a school district that does not provide a broad-based in-person learning option for all students in kindergarten through grade 12 by Feb. 8. It would also allow the funding to flow to accredited private schools should a student choose that option.

The crowd booed loudly at Woznick's description of SB107.

"This bullying is targeted at each and every student at the Salt Lake City School District by taking away educational dollars," Woznick said. She then quoted Weiler, who said last month he would hold the bill as long as Salt Lake School District moved forward with in-person, but "we will keep that bill locked and loaded so if for some reason the policy changes between now and the end of the session we can still pull that trigger if we have to."

"Now who would use that comparison like that except for a bully?" Woznick asked.

She went on to criticize House Speaker Brad Wilson, R-Kaysville, for moving last year to withhold $1,500 teacher bonuses from school districts that didn't offer in-person learning. Since then all teachers have been promised that bonus, but also since then Salt Lake City School District has moved to obey the demands of the Legislature. 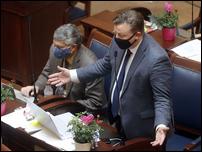 A bill originally seen as a way to push the Salt Lake City School District into returning all students to the classroom is now focusing on testing for students after its sponsor made major changes Friday.

"Salt Lake School Board had to make a choice. I don't fault them," Woznick said. "But compliance and choice are not synonyms."

So what was the point of Wednesday's Salt Lake Education Association rally on the steps of the Capitol?

"Salt Lake schools opened. All families were offered the choice to have their students return to in-person learning or remain remote by Feb. 8," Woznick said. "Why then? Because teachers teach. Regardless of age or population."

Woznick said students in fifth grade learn "how government works. That respect for our institutional structure and election processes are taught to be honored, where ideologies and political affiliation should be checked at the door for the greater good to get the job done right by the people.

"In fifth grade we teach them their voices matter and their votes count. That bullies don't get the final say, even if it seems like they won," she said. "There is always another election, another chance to use your voice and your vote. Fifteen hundred dollars is a lot of money to donate to get these bullies unelected."

The crowd cheered again for Woznick. Some in the crowd held a large sign that read "Local control? Not 4 SLC District." Another supporter held a sign that read, "Just say no to threat-islation!"

The House Government Operations Committee voted 8-2 to endorse the bill and send it to what could be its final legislative hurdle: the House floor.

That was despite protests from the Utah Education Association and the executive director of the state's own health department, concerned that a 2% COVID-19 case threshold, up from 1%, was too high to be able to clamp down on COVID-19 outbreaks fast enough.

But others, including Mary Catherine Perry, a mother of four who lives in the Salt Lake City School District, urged the House committee to support the latest version of SB107, thanking Weiler and other lawmakers for "stepping forward and listening to the families, students and teachers who have advocated for in-person learning for our students."

"We need the checks and balances offered in this bill," Perry said, pointing to requirements that the Senate president, House speaker, governor and state superintendents approve future pauses on in-person learning. "Our students need the option to return to in-person learning at least four days a week just like every other student in the state has. And we need the thresholds outlined in this bill ... to keep our schools open."

Perry said she was "grateful" for lawmakers' "courageous and consistent support," for approving significant education funding increases this year, for prioritizing teachers for the COVID-19 vaccine, and for the $1,500 teacher bonuses. She said the option to return to school was a relief for many Salt Lake City School District students.

Earlier Wednesday, Weiler told the Deseret News he "understood" that the Salt Lake Education Association organized the rally to respond to their frustrated constituents, but he argued the bill is benign in its most recent form.

Our students need the option to return to in-person learning at least four days a week just like every other student in the state has. And we need the thresholds outlined in this bill ... to keep our schools open.

Weiler said SB107 is one of only four education bills he's run in his 10 years as a legislator "because I believe the local control should be there."

Weiler said school boards, like cities and towns, are political subdivisions of the state, and so that's why sometimes it's necessary for the Utah Legislature to step in.

"You know when there is a problem? I know there's a problem when my constituents are saying, 'My school board won't listen to me. Will you help?'" Weiler said. "And they have no other avenue of appeal. ... If you go to your school board and they turn you down, there's nowhere else to go except the state Legislature."

"And the only reason we're involved," Weiler added, "is because parents of failing students have said, 'Please, my school board has turned a blind eye to my child's needs. Will you step in and help?'"

But Weiler said he also understood why the Salt Lake Education Association felt compelled to hold a news conference Wednesday.

"I've been a city council member and seen the state Legislature take action. It's frustrating," he said. "But we all do what we all have to do. And so I wish (SB107) wasn't necessary in the sense that I wish that the Salt Lake School Board would have, on their own initiative, decided that we need to put students' need first."

In a prepared statement issued earlier Wednesday, Tobler said, "We have all wanted to return to in-person learning as quickly as safely possible, but student and educator health and safety must be paramount." He said the Salt Lake Education Association supported the Salt Lake City School District Board's decisions to "protect its students and employees" and "we resent legislative attempts to usurp the authority of a locally elected school board to make decisions in the best interest of those they serve."

During the rally, Taisei Summerhays, an 18-year-old senior at West High School, read a speech condemning Utah lawmakers who "bullied the school district into endangering the lives and well-being of our teachers, students and our communities."

"We are frequently told by politicians and privileged parents that as students, our grades are of the utmost importance, and that returning to schools was a way to improve that," Summerhays said, describing how he, too, has found it hard to do his schoolwork remotely. "But focusing on our grades ignores the fact that both in reality and in the opinion of most of us students, our grades are worth less than the lives and well-being of our teachers and classmates."

Rep. Jennifer Dailey-Provost, D-Salt Lake City, disputed Weiler's assertions that many Salt Lake City parents wanted in-person learning options. "I have an 11th grader at West High," she told the House committee, who decided to return to the classroom "after much deliberation." Dailey-Provost said she was the "only person on the bus" and her largest class is made up of five students.

"It's because the vast majority of students are still opting for remote learning. These are the decisions that the families are making," she said. "So the need to be in school, the demand for that is not as high as being indicated by the intent stated for this bill."

As a representative of Salt Lake City, Dailey-Provost said she's had "one parent — one — contact me begging for students to be back in school in person."

"We as the government constantly talk about the value of small government and letting government govern where it's closest to the people, and this is an absolute betrayal of that philosophy," she said. "We need to let the parents and the school districts do what's best for their kids. They have been back in person two days a week, if they opt to, for two weeks, three weeks maybe. Let's let them sort these out."

Dailey-Provost attempted to hold SB107 in committee, but her motion failed on a party-line vote. Rep. Candice Pierucci, R-Herriman, argued it's worth it if it allows the option, even if it's just for a few students.

The bill now goes to the full House for consideration.