SALT LAKE CITY — Utah lawmakers are advancing a bill that would limit when police can use deadly force, but only if a person is solely a danger to him or herself.

The Utah House voted 54-16 to approve a tempered version of HB237 on Tuesday. The bill now goes to the Senate for consideration.

House Minority Assistant Whip Jennifer Dailey-Provost's HB237 in its original form would have changed the justification in Utah's statute for a police officer to use lethal force to include both of the words "reasonable and necessary" — not just "necessary" — to prevent a suspect from escaping or to prevent death or serious bodily injury to the officer or another person.

The bill was substituted in House Law Enforcement and Criminal Justice Committee on Monday to specifically prevent police officers from shooting someone in the midst of a suicidal crisis — so long as they aren't threatening anyone else.

In Monday's committee hearing, Rae Duckworth, an activist with Black Lives Matter Utah, spoke in favor of the bill.

"My cousin is Bobby Duckworth," she said, referring to a man who was shot and killed by a Wellington, Carbon County, police officer in 2019. "If this was active prior to Sept. 10, 2019, it could have saved Bobby's life and encouraged officers safely to utilize less-than-lethal options and take necessary steps to conserve a life."

"I can't do this anymore," Bobby Duckworth can be heard saying in the footage. 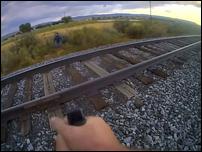 ‘I don’t want to shoot you,’ officer pleads before firing fatal shots

As a man holding two knives briskly advanced toward him, a Wellington, Carbon County, police officer retreated with his gun drawn.

The situation took a dark turn when Bobby Duckworth briskly advanced toward the officer with the knives still in his hand. Moments later, the officer fired at least six shots, killing him.

"The people of Salt Lake, they deserve this bill," Rae Duckworth said. "They deserve this slice of peace knowing that their city is capable of holding law enforcement to an unambiguous standard."

On the House floor Tuesday, Dailey-Provost, D-Salt Lake City, described the bill as "an important step in bridging the gap given the discord and frustration of the last many months" after the summer of unrest following the killing of George Floyd at the hands of Minneapolis police last May.

"I'm excited about the fact we were able to come to common ground with this bill," Dailey-Provost said, saying the bill had the support of law enforcement groups.

Before the vote, Rep. Cory Maloy, R-Lehi, clarified that the bill would mean "if someone is threatening themselves, law enforcement cannot use lethal force to stop them from hurting themselves."

"What about a threat to law enforcement, would that prevent them from defending themselves?" Maloy asked.

The bill drew no other discussion or debate.

Dailey-Provost asked for support for the bill and urged her fellow lawmakers to recognize "we as a body have a responsibility to address both the needs of our criminal justice system and our community. And I think this is a really important step forward in finding that compromise."

Sixteen Republicans voted against the bill without explaining why they opposed it.