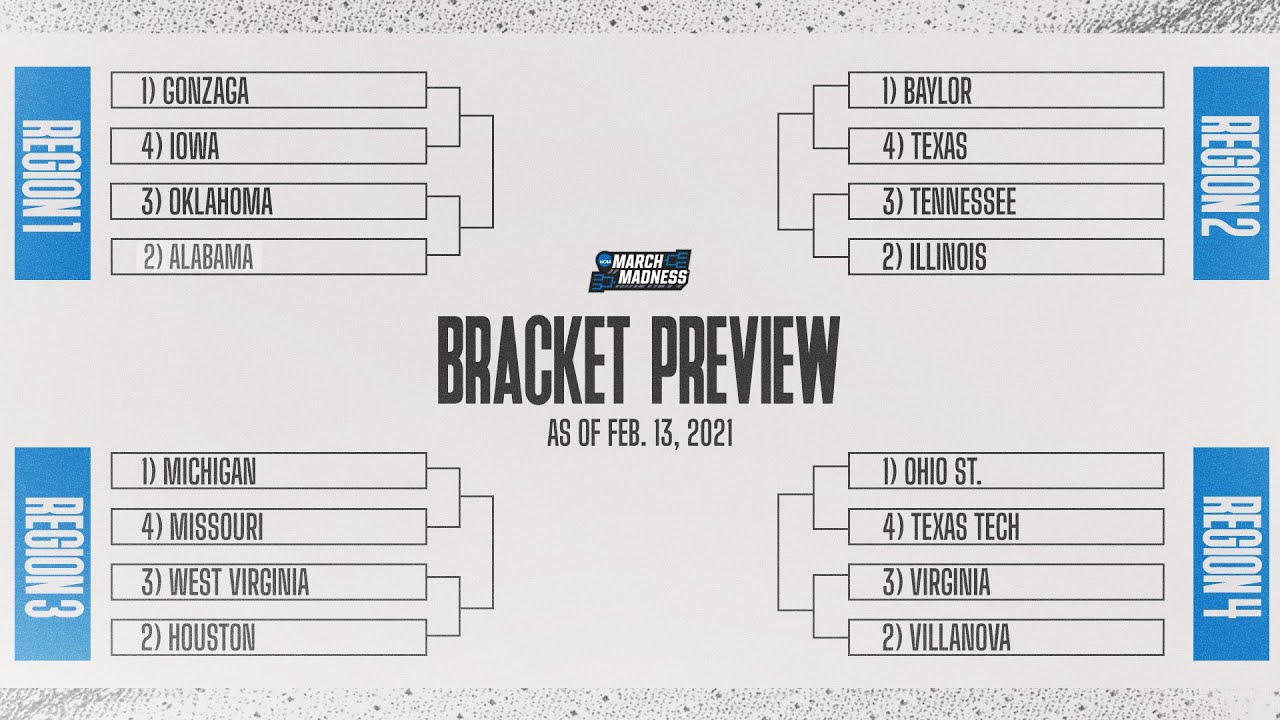 SPOKANE, Wash. (AP) — Gonzaga and Baylor have played like the nation's best teams all year. The committee that will ultimately select the field of 68 for the NCAA Tournament sees it that way, too.

The Bulldogs were the No. 1 overall seed followed by the Bears in rankings released Saturday by the NCAA Division I Men's Basketball Committee. It was part of a snapshot of the top 16 seeds with a month to go before Selection Sunday, starting with the teams that have been 1-2 in The Associated Press men's college basketball poll all season and remain unbeaten.

Third-ranked Michigan and fourth-ranked Ohio State followed as the other two No. 1 seeds, while fellow Big Ten team Illinois was the top No. 2 seed and fifth overall.

The Big 12 had the biggest haul in this initial list with five teams. Beyond Baylor, West Virginia and Oklahoma were No. 3 seeds, while Texas Tech and Texas were No. 4s.

Villanova, Alabama and Houston joined Illinois as the other No. 2 seeds. Virginia and Tennessee joined the Mountaineers and Sooners as No. 3 seeds, while Iowa and Missouri were the other No. 4 seeds.

This first run of seedings comes amid postponements and pauses for teams due to concerns with the COVID-19 pandemic, which led to the cancellation of last year's tournament. The Wolverines are a notable example; they're returning from a three-week hiatus Sunday.

Barnhart said "no one is going to be penalized for being on pause." He also pointed back to traditional evaluations such as winning on the road, citing challenges such as following testing protocols while traveling even while playing in venues with few or no fans.

"It is not the committee's job to speculate and sit here and say, 'What if they played?' or 'What if they had more games on their resume?'" Barnhart said. "We just have to evaluate the resumes as they lie and take a look at those things that have been our principles all along."

Barnhart said 17th-ranked Florida State and 20th-ranked Southern California were among the most discussed teams that didn't make the cut, saying the Seminoles and Trojans were "certainly bumping their heads" on that list.

The entire tournament will be played in Indiana because of the coronavirus pandemic, so the brackets lacked their traditional geographic names. Instead, Gonzaga headlined Region 1 and was paired with Alabama, Oklahoma and Iowa.

Baylor was the No. 1 in Region 2, followed by Illinois, Tennessee and Texas. Michigan sat atop Region 3, grouped with Houston, West Virginia and Missouri. And in Region 4, Ohio State was joined by Villanova, Virginia and Texas Tech.

NCAA senior vice president of basketball Dan Gavitt said the NCAA is requiring seven consecutive days of COVID-19 testing for teams before arriving for the tournament, as well as daily testing throughout their stay. A positive test would trigger steps such as isolation from others and contact tracing, but Gavitt said there was "a procedure and protocols in place that should not eliminate teams from the entirety of the tournament" if they follow guidelines such as wearing masks and avoid close contact with others.

Gavitt also said NCAA officials are "optimistic and hopeful" about having at least a limited number of fans attend games after communication with local health officials. Gavitt said player guests can attend all 67 tournament games.