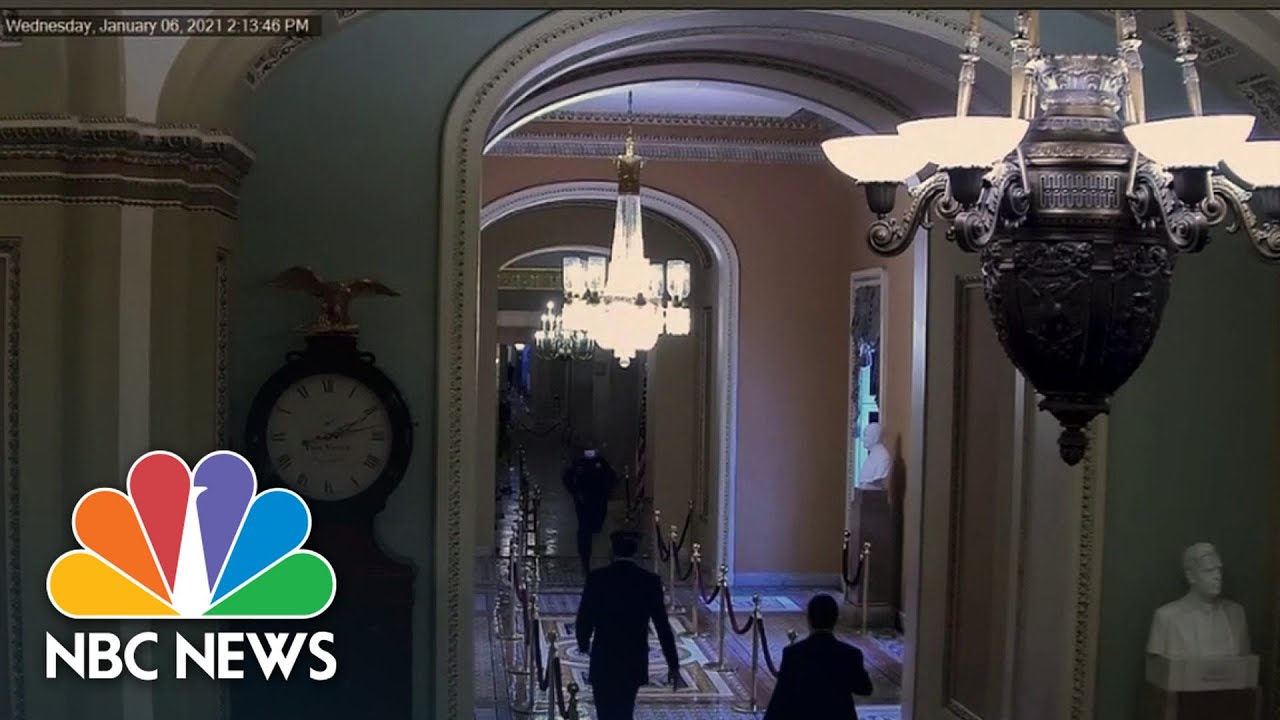 SALT LAKE CITY — House impeachment managers showed a video Wednesday of a Capitol Police officer redirecting Utah Sen. Mitt Romney to safety as he fled from the Senate chamber during the deadly insurrection at the U.S. Capitol last month.

The brief clip displayed during the Senate trial of former President Donald Trump shows officer Eugene Goodman running toward Romney as he briskly walks down a hallway. Goodman turns Romney around while another man helps whisk the senator in another direction. Romney makes a U-turn and runs down an adjoining hallway.

"Officer Goodman passes Sen. Mitt Romney and directs him to turn around in order to get to safety," impeachment manager Delegate Stacey Plaskett, of the U.S. Virgin Islands, says as the video plays on a screen in the Senate chamber.

The footage came from surveillance cameras inside the Capitol and had not been previously shown publicly.

It was among chilling, never-before-seen video of the Jan. 6. attack that House managers presented in their case against Trump. The violent and graphic video showed members of Congress being evacuated and congressional staffers running for their lives as the armed mob rampaged through the building, sometimes narrowly missing the rioters.

Romney told reporters at the Capitol after the Senate session that he did not know the officer was Goodman.

"I look forward to thanking him," he said.

In a statement, Romney said it was "heartbreaking and overwhelming" to witness the violence law enforcement officers faced on Jan. 6.

"I am personally deeply grateful to Officer Eugene Goodman for his bravery, and I am thankful for all of the officers and agents whose heroic actions prevented a tragic situation from becoming even more horrific," he said

Romney is among a bipartisan group of senators that introduced legislation last month to award Goodman the Congressional Medal of Honor.

We appreciate your bravery and service, Officer Eugene Goodman!! https://t.co/iJ21G5rDU5

Goodman was hailed as a hero for his actions on Jan. 6. He was captured on video diverting rioters away the Senate chamber and potentially saving lives.

Video and still photos show Goodman luring the mob away from the unguarded doors to the Senate chamber a minute before they were locked. His actions gave lawmakers time to evacuate to a secure location before the rioters entered the chamber.

Senators were initially locked down with their colleagues in the Senate chamber and then evacuated to a safe location in the complex.

Romney says that was his first time seeing the footage of Goodman telling him to get safety.

"I look forward to thanking him," he tells reporters