FARMINGTON — A Layton man accused of killing a woman without provocation on their first date is considering a potential plea agreement, his defense attorney said Tuesday.

But prosecutors say there's no deal. They're making it clear that they haven't offered to downgrade the murder charge against Ethan Hunsaker, 25, or recommend a lighter prison sentence in exchange for a guilty plea in Farmington's 2nd District Court.

Hunsaker is charged with murder, a first-degree felony, in the death of Ashlyn Black, 25. After meeting on Tinder, the pair went to a bar and returned to his home, where he choked and stabbed Black hours later while they were cuddling, according to charging documents.

Hunsaker called police early on May 24 and reported that he had killed someone he'd met on social media, the charges state. Theirs was a "normal date," with no argument, Hunsaker allegedly told police.

At the Tuesday court hearing held via videoconference, defense attorney C. Markley Arrington said "we're heading toward a plea of guilty but with mental illness."

The coronavirus pandemic has delayed a resolution in the case, Arrington said. He wants to meet with his client to review a potential plea agreement at the Davis County Jail, but such visits there are on hold because of the pandemic.

"I know the victims are anxious to have some closure in this. So is my client and his family," Arrington said. But the attorney said he feels the needs to meet with Hunsaker in person to explain his options and answer any questions that arise.

"The offer is, 'Plead guilty as charged,'" Rawlings told the Deseret News. 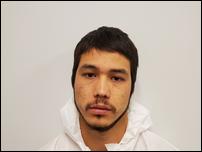 The family of a woman police say was killed by a man she met on Tinder Saturday night called the crime "senseless" and that their lives have been forever changed by it.

Arrington said he wants to meet with Hunsaker to explain a portion of Utah's criminal code. The part of the law Arrington referenced considers mental illness a mitigating factor in certain circumstances, allowing a charge of murder to potentially be dropped to manslaughter.

Hunsaker has an unspecified mental illnesses, according to court documents, and is accused of thinking of ways to kill and kidnap others shortly before Black's death. Hunsaker also expressed a desire to have police kill him, prosecutors allege.

Black had a knack for working with special needs children, according to her family. She dreamed of starting a family of her own and adopting a child with Down's syndrome, loved vintage clothing shops and didn't hesitate to speak up for others.