SALT LAKE CITY — After a heated debate on Thursday, the Utah Senate is poised to pass a bill to drop the permit requirement for Utahns to carry a concealed firearm.

HB60 co-sponsor Sen. David Hinkins, R-Orangeville, emphasized that the concealed carry permit does not include extensive gun safety training, but simply requires someone to take a three-hour class, submit an application and pay a fee.

"But for people that say this somehow qualifies me to carry around my firearm with any sort of training is ludicrous. I can get this without having one minute of training with a firearm. That's the law today. So going from this to the constitutional carry provision is not going to increase or decrease safety one iota. This is going to, I think, restore quite literally what the Founding Fathers had originally intended," Hinkins said.

Should the bill pass, the concealed carry permit program will remain available and will still be needed for those who wish to carry concealed firearms when they travel to other states, he noted. Hinkins said that those who carry a firearm also have "a moral obligation to get training" on their own.

During the floor debate, Sen. Kathleen Riebe, D-Cottonwood Heights, introduced an amendment that would exclude counties with populations higher than 700,000 people from the bill.

Noting recent "turmoil" in Salt Lake County, Riebe said she has "received numerous emails very concerned about how this would impact our county."

Sen. Derek Kitchen, D-Salt Lake City, agreed, adding that the county is an "immense, diverse" district where some people sleep on streets and others live in multimillion-dollar homes. 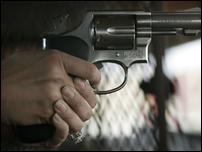 A Utah bill that would allow concealed carrying of firearms without a permit prompted debate Friday among some who believe it will promote individuals' safety and others who fear it will prove deadly amid the mental health crisis.

Hinkins said that he would resist such a change to the bill because conservative Utah County, which now has well over 600,000 residents, will soon reach that population level.

"And some of us country bumpkins could come up here not knowing the law in Salt Lake City, might get arrested for concealed carry," Hinkins said, adding that laws should be consistent throughout the state.

Riebe's amendment was voted down by the Senate.

Sen. Gene Davis, D-Salt Lake City, expressed concern about "(arming) the citizenry" even as other bills this year seek to limit officers' ability to use deadly force.

"I just don't think this is good public policy. This isn't the Old West of the 1820s anymore. We're in 2021 … and I think the one thing is that we've seen with the proliferation of weaponry in this country, the anger of individuals has risen," Davis said.

He said he believes citizens have the right to own weapons, but shouldn't be able to "pack around (guns)" for show.

"Because it is attached to firearms, people are losing their minds," he added.

Riebe said that if the concealed carry permit class doesn't train someone to be a safe gun owner, that is what should change instead.

The Senate supported the bill in an initial vote 23-6 along party lines, indicating the bill will likely pass in a final vote. The bill already passed the House on Jan. 26.

After the debate, Sen. Todd Weiler, R-Woods Cross, introduced a tradition by awarding Hinkins a wooden spoon because he "stirred the pot" and asked him to pass it on to another lawmaker in the future.