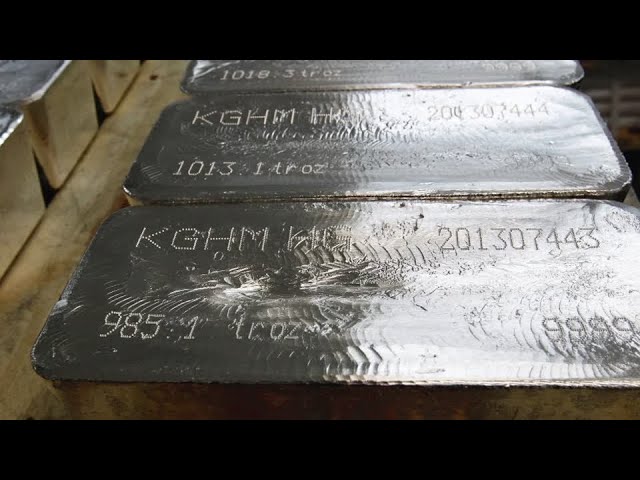 SINGAPORE (Reuters) — A social media-driven buying spree lifted silver to an eight-year high on Monday but the rally cooled on doubts about the ability of retail traders who are normally focused on stocks to move prices in a bigger, more liquid commodities market.

Video game retailer GameStop, at the center of last week's "Reddit rally," slid 30.8% to $225, but other shares caught up in the frenzy that has battered short-sellers extended their advance, including BlackBerry.

A lot of people who were anticipating a GameStop-like rally in silver "now realize there is not as much buying pressure pushing it up like some had thought," said Michael Matousek, head trader at U.S. Global Investors.

It was not clear how long the Reddit-fueled rally in stocks shorted by hedge funds would last. It could mean more losses in the wider market this week if funds have to keep selling to meet redemptions or right their portfolios. Longer-term, they may have to shift strategies.

Share prices swung wildly last week when small-time traders, who organised in online forums and traded with fee-free brokers such as the Robinhood online brokerage, saddled several powerful hedge funds with losses on their short positions.

The effect of the struggle on the wider U.S. market abated on Monday, with stocks ending sharply higher after last week's steep market sell-off. AMC was flat, having risen more than 500% this year. BlackBerry shares were higher in New York and Toronto trading.

The showdown has drawn scrutiny from financial regulators, lawmakers and the White House, concerned about possible market manipulation.

Robinhood Chief Executive Vlad Tenev is expected to testify before a U.S. House of Representatives committee on Feb. 18, Politico reported on Monday, citing people familiar with the matter.

Robinhood raised another $2.4 billion from shareholders just days after existing investors pumped in $1 billion, it said in a blog post. The company, which faced anger last week for curbing the purchase of some stocks, raised trading limits on GameStop, AMC, Koss Corp and Express.

The firm is preparing for an initial public offering but it was not clear if it will push forward with those plans.

Traders and analysts poured cold water on the chances of a prolonged rally in silver, saying unlike in GameStop, there is no excessive short positioning and that the options market is fairly well balanced.

"Unlike single stocks, the market for silver is much larger and more complex and therefore more difficult to manipulate," said Raffi Boyadjian, senior investment analyst at XM, in a note.

Traders were growing concerned that the Reddit effect could extend to less liquid commodities markets. However, traders said exchange-traded funds that focus on commodities were more likely to be targets.

The iShares Silver Trust ETF, the largest silver-backed ETF, jumped 7.1% on Monday. Data showed its holdings rose by a record 37 million shares from Thursday to Friday alone, each representing an ounce of silver.

Natural gas rose about 10% on Monday, in part due to expectations for colder weather, though such moves are not out of the norm for that market.

Retail investors on the popular Reddit online forum WallStreetBets expressed concerns on Monday that bets on silver were undercutting their focus.

"By buying silver ... you would be directly putting money into the pockets of the EXACT HEDGE FUNDS ON THE OTHER SIDE OF $GME," wrote one user who urged investors to continue to buy GameStop. "It will put you on the sidelines from this righteous and glorious war we are in."

The silver furor began on Thursday after posts on WallStreetBets urged investors to buy physical silver.

"Get out there and buy at least 4 ounces of silver as soon as you can," one forum participant posted.

Global short interest in silver, or the cumulative value of bets it falls in price, is equivalent to about 900 million ounces, just short of annual global production.

Banks and brokers hold most of that but it is not clear whether they are net short on the metal or whether their bets offset very big physical holdings.

JPMorgan analysts said fundamentals did not justify a sustained decoupling of silver from gold. Gold prices rose less than 1% on Monday.