'It's gone a lot smoother': Applications being processed for 2nd round of PPP

"We want to make sure that every small business in Utah comes out of this pandemic in a strong position," said Howard Headlee, president of the Utah Bankers Association.

Headlee said it's especially important that restaurants and hotels look into securing a second or first loan if they didn't participate the first time.

"Utah is a tourism and hospitality-driven state," Headlee said. "They've been hit the hardest, and this round, we can actually give them more money, so it's critical that they reach out to their bank and get going on this process so that they can get this kind of support."

Wells Fargo officials reported that as of Jan. 22, the bank had submitted 429 applications for Utah businesses. Those applications totaled $20 million in requested funds and represented about 2,500 Utah jobs.

"I think it's gone a lot smoother, and the infrastructure is there to take care of customers," said Brandon Meredith, Wells Fargo's small business manager for Utah.

Meredith said there is still some uncertainty among small business owners about the second round of loans.

"I would encourage all small business owners to get as many of the facts as they can," Meredith said. 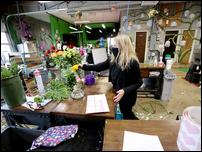 Saved once by fed help, Salt Lake business owner hopes new PPP can get her across pandemic finish line

Last year, when the COVID-19 outbreak initially struck, Marci Rasmussen's downtown floral shop was one those businesses that felt the direct impact.

Across the country, Wells Fargo said that 86% of the applications so far have been for companies with 10 or fewer employees, and the average loan size is $58,000.

The U.S. Small Business Administration announced that it has already approved approximately 60,000 PPP loan applications during the first week (ending Jan. 17) of the second round of the program.

"The SBA continues to help small businesses across the nation access vital funds through the Paycheck Protection Program," said a statement from SBA Administrator Jovita Carranza.

Companies have until March 31 to apply for a first or second PPP loan — or until funding for the program runs out. The maximum amount of a second PPP loan is $2 million.

In order to qualify for a second PPP loan, a small business must have 300 employees or less and demonstrate at least a 25% reduction in revenue during one quarter in 2020 (when compared to the same quarter in 2019), according to the SBA.