SALT LAKE CITY — Law enforcement officers around the country are warning survivors of sexual assault not to buy kits allowing them to gather DNA evidence at home instead of going to a hospital.

Now a Utah lawmaker wants to go a step further and ban the sale of the kits that she says can seem convenient but ultimately give false hope because they're widely considered inadmissible in court.

"I don't want to set up someone for failure," said Rep. Angela Romero, D-Salt Lake City.

The kits aren't yet available in Utah, but Romero said she wants to keep it that way as makers market them as a smart choice during the coronavirus pandemic.

But others argue that the home kits are effective and provide sexual assault victims with a measure of control, particularly for those uncomfortable speaking with police or going to a hospital setting.

Under HB168, selling a self-collection sexual assault kit would be an infraction punishable by up to $500. The proposal is modeled on a 2020 New Hampshire law.

Only a small share of those victimized ultimately report sexual crimes, Romero said, so it's an "injustice" to allow them to believe that the kits can secure a criminal conviction or be entered into a national DNA database that helps identify repeat offenders.

Fellow members of the House Law Enforcement and Criminal Justice Committee agreed with her on Friday, sending the bill to the full House for consideration in a unanimous vote.

Supporters of the measure say the self-administered kits don't follow scientific safeguards against contamination or meet strict standards for evidence that can be used in criminal trials. Moreover, advocates say, those who forgo a forensic medical exam miss out on free medicine, follow-up health care and other types of support.

"The reality is, these kits are harmful, and our services in the state of Utah are highly collaborative and survivor centered," said Sonya Martinez-Ortiz, executive director of the Rape Recovery Center.

But opponents of the bill and some of the companies it targets say the kits empower victims by providing more options. They argue the evidence is just as admissible in court, and they're working on providing medical resources and therapy.

Jane Mason, founder of Preserve Kit and a retired FBI special agent, told the panel that judges outside of Utah have upheld the admissibility of the kits, including on appeal.

"There's no chain of custody issue and there's no admissibility issue, until you get to court and you hear what the defense motions are going to be," she said.

Victims of different sorts of crimes bring evidence to police routinely, she said, and her kit is simply a new avenue to do so.

One lawmaker on the panel, Rep. Paul Ray, R-Clearfield, said the legislation "is a self-preservation issue" for Mason. Her company, Preservation Group, was among several companies that received cease-and-desist letters from states' attorneys general in New York and Oklahoma.

"I'm not sure I understand what you mean by self-preservation," Mason responded. Hostility to the product has bankrupted her, she said, "so now I am not in business, but thank you."

Others disagreed with her view of how a judge would view a prosecutor's effort to admit the evidence.

"A defense attorney is then going to say, 'Well, hold on a second, how do I know that you didn't get this evidence, this DNA evidence, from some other source, and now you're saying this is confirmation of you getting assaulted?'" said Salt Lake County District Attorney Sim Gill.

By contrast, evidence collected by sexual assault nurses is promptly handed off to police, ensuring that a case isn't thrown out in court due to concerns about the chain of custody, he said.

When victims go to a hospital for a sexual assault exam, forensic nurses allow them to decide whether to gather DNA evidence for potential use in a criminal prosecution, said forensic nurse and researcher Julie Valentine.

But the nurses do more. They also document injuries, provide free medication to prevent pregnancy and sexually transmitted diseases, and set up follow-up care and other support services, Valentine told the panel. 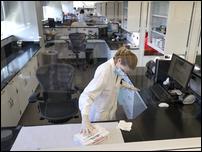 When patients in years past asked Julie Valentine what would become of evidence she collected in their sexual assault exams, the longtime forensic nurse didn’t have an answer.

"If you have a victim that's at home and does one of these kits, they do not get any services," she said. And while the exams typically take place in hospitals, many are now happening in alternative settings because of the pandemic, she said.

Jeanlee Carver, a nurse practitioner who conducts sexual assault exams in northern Utah, sees it differently. While a medical exam is best, she said, the at-home kits provide victims a measure of control.

They could be useful in cases like that of a 16-year-old girl assaulted in Weber County Thursday night who refused an exam and declined to speak with police, she said.

Madison Campbell, the CEO of Leda Health, told the panel her company is working on providing access to resources for detection of sexually transmitted infection, group therapy and virtual sex assault nurse examiners who can walk customers through the process. She urged lawmakers not to ban the tool before it becomes available in the Beehive State.

Their arrival would not be a good thing, said Liliana Olvera-Arbon, the executive director at the Utah Coalition Against Sexual Assault. She noted there are many who live with their abusers, and questioned what may happen if an aggressor discovers the kit in the mail.

The state announced in September that it had worked through its backlog of more than 3,000 sexual assault kits, a milestone that came three years after the Legislature passed a law requiring the testing of the kits in an effort to end yearslong wait times and bring more offenders to justice.