SALT LAKE CITY — Utah Republican Congressman-elect Burgess Owens says he's backing a planned objection to Congress certifying the presidential election next week in order to fight for freedom and because the outcome doesn't make sense to him.

Owens questions how President-elect Joe Biden obtained more votes than President Donald Trump when the president did well with various minority groups. He also claims there were irregularities like 42,000 votes being counted twice in one state.

"Seventy-four million votes and we're supposed to believe that, of course, in this case here that Joe Biden is more powerful this time than Barack Obama. It doesn't make sense to me anecdotally or factually," he said Thursday on KSL Newsradio's "Live Mic."

Biden tallied 81.2 million popular votes in the November election to 74.2 million for Trump. Biden holds a wide margin in the Electoral College, 306-232.

Congress will convene in a joint session next week on Jan. 6 to certify the presidential vote.

Rep. Mo Brooks, R-Ala., and Sen. Josh Hawley, R-Mo., intend to object to the certification, which observers say has little to no chance of succeeding. Congress will only hear an objection to the election results that is in writing and signed by both a member of the House and a member of the Senate.

CNN reported Thursday that two Republican members of the House say they expect at least 140 of their GOP colleagues in the House to vote against counting the electoral votes.

Owens is among at least 10 incoming GOP freshmen in the House who intend to back Brooks. He said he doesn't know if he will simply stand with Brooks or raise his own objection. Either way, it would be his first action as a newly sworn congressman.

"This is all new to me, so I'll figure that out as we get close," he said. 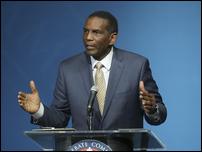 Utah Republican Congressman-elect Burgess Owens is among a group of incoming House members who plan to back Rep. Mo Brooks' effort to object to the certification of the presidential election results next week.

Democrats, Owens said, want people to believe the outcome is a foregone conclusion. He said every option should be used to "hold on to this great thought of freedom that we have and not be bullied."

A former NFL player, he compared it to playing a game until time expires regardless of the score and leaving everything on the field.

"It comes down to this. It's not even the numbers. It's the principle. It's what we stand for. It's what we're willing to fight for," he said. "I'm not going to give in just because people say that the score is against me. We're going to fight this process through."

Once Congress tallies the electoral votes, Owens said "whoever's the president I will support, I will recognize him as the president." He said he will support policies that are in concert with his beliefs and fight against those that are not.

Owens, a frequent Fox News guest, defeated incumbent Democratic Rep. Ben McAdams in Utah 4th Congressional District. He will take the oath of office when the House convenes at noon on Jan. 3 as specified in the Constitution, which will be a little unusual because it falls on a Sunday.

"Very, very excited about it. It's been quite a journey, to say the least," Owens said, adding that he intends to head to Washington on Friday.