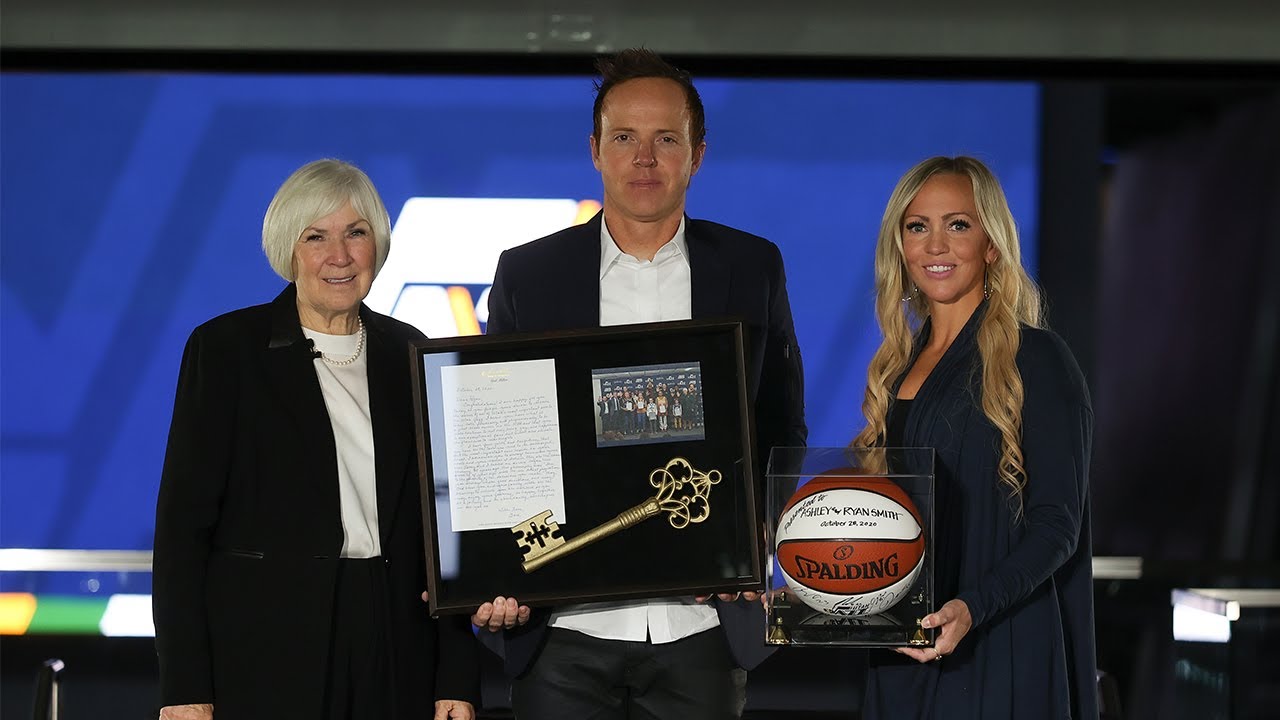 SALT LAKE CITY — Longtime Jazz owner Gail Miller admitted that Wednesday was a day she could never imagine. After 35 years of helping run the Utah Jazz, she is handing the keys to someone else.

In a stunning move, the Miller family is selling a majority interest in the Jazz to Qualtrics founder and CEO Ryan Smith, the team announced Wednesday morning. The Millers had owned the Jazz since 1985 when Larry H. Miller, Gail's late husband, purchased 50% of the club.

The Millers have agreed to sell the Jazz to Smith for $1.6 billion-plus, ESPN's Adrian Wojnarowski reported. The Larry H. Miller Group will retain a minority interest.

Smith, who is 42, will be one of the youngest owners in the NBA. He will join Memphis Grizzlies owner Robert Pera, also 42, as the only NBA team owners under the age of 50.

The deal also includes Vivint Arena, the Salt Lake City Stars, as well as a management agreement with the Salt Lake Bees. Smith will also be purchasing The Zone Sports Radio Network in a separate transaction. The deal is not finalized but is expected to be done by the end of the year.

Steve Starks, the chief executive officer for the LHM Group and former president of the Jazz, will be an advisor.

In a symbolic showing of the sale, Gail Miller handed a key to Smith and a basketball to his wife, Ashley.

But getting to own them soon will.

Smith, a Utah native, has been connected with the Jazz for a number of years. In 2017, Qualtrics donated the team's Jazz jersey patch to 5 For The Fight — the first jersey patch in North America dedicated to a cause. That helped form a strong relationship between Smith and the Millers, and helped pave the way for Wednesday's announcement.

"I have known Ryan for several years and admire the values by which he and his wife, Ashley, live their lives," said Gail Miller. "They have such love for and a connection to Utah and this team. Because of our friendship and several high-level conversations over the years, Ryan recently approached our organization to inquire about the possibility of purchasing the Utah Jazz and some of our other sports and entertainment properties.

"After much soul searching, lengthy discussions, and extensive evaluations of our long-term goals, my family and I decided this was the right time to pass our responsibility and cherished stewardship of 35 years to Ryan and Ashley, who share our values and are committed to keeping the team in Utah. We have every confidence they will continue the work we have undertaken and move the team to the next level. Our family remains invested in the success of the Utah Jazz and these businesses, and we will retain a minority interest."

In early 2017, Gail Miller put the Utah Jazz into a Legacy Trust. She said on Wednesday that "this was done in connection with my estate plan with the objective of assuring our loyal fans that the team would remain in Utah." The trust made sure that there would be no material benefit to the family from the Jazz, and ownership of the franchise will be held collectively by the trust. In short, it was about protecting the future sale of the team.

While Wednesday's deal is a reversal from the trust, Miller said that selling to Smith ultimately honors the reasons for establishing it in the first place. Smith has no intention of moving the Jazz away from Utah.

"There's been a lot of attention given in recent years to my putting the team in a legacy trust," Miller said. "This was done in connection with my estate plan with the objective of assuring our loyal fans that the team would remain in Utah. I am fully convinced that with this sale the objectives of that trust will still be honored. I want you to know that the new owners have made the same commitment to keep the team in Utah."

Smith built Qualtrics into a tech giant, selling the company for $8 billion in 2018. Smith, who has also been rumored to be interested in buying Real Salt Lake, said that he had approached the Millers multiple times about buying the team.

"The Jazz are a gift to this whole community," Smith said. "And that's how we view it. That's 100% how we view this. And we look to use this platform to continue to do good. So thank you, Gail. Thank you, Miller family. ... We're extremely excited to, to continue this journey and build upon the legacy that's here — and that's honestly what's made this possible. And there's not really another team or another opportunity that we would do this with, and there's no one I'd rather do it with my wife, Ashley."

Utah Governor Gary Herbert congratulated both the Miller family and Smith on Twitter.

Congratulations to the Miller family. They have developed a terrific franchise in the @UtahJazz — and congratulations to @RyanQualtrics for investing in the Jazz and in Utah. I wish all involved great success, and thank them for all they’ve done to make Utah the state of sport.

"Congratulations to the Miller family. They have developed a terrific franchise in the @utahjazz — and congratulations to @RyanQualtrics for investing in the Jazz and in Utah. I wish all involved great success, and thank them for all they've done to make Utah the state of sport," said Herbert.