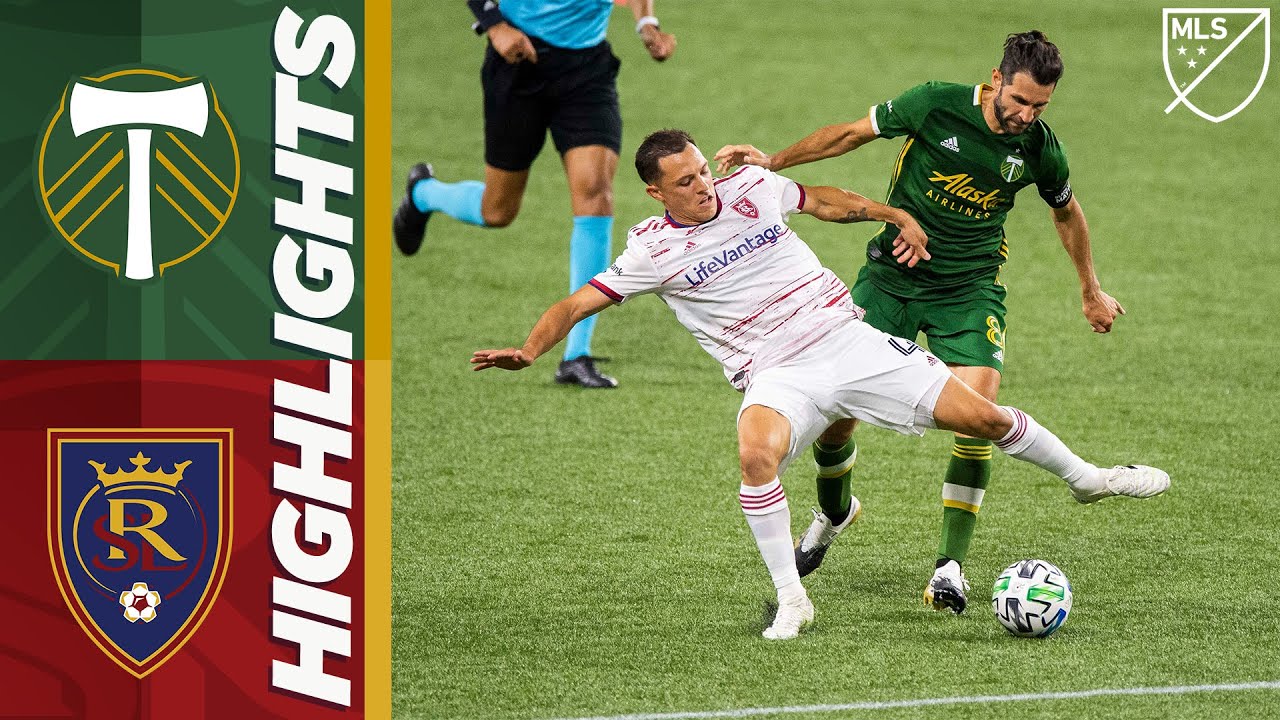 SALT LAKE CITY — Corey Baird cut inside near the edge of the penalty area, and danced through traffic in the fourth minute of stoppage time.

He knew there was only a short amount of time on the clock — possibly seconds — as he looked for an equalizing goal while trailing Portland 4-3 in a wild game.

He wanted a goal.

An assist — and road point — will work just fine, though.

Sam Johnson’s goal in the fourth minute of stoppage off an assist from Baird helped Real Salt Lake earn a last-gasp 4-4 road draw with Portland Timbers FC at Providence Park in Portland, capping a wild game that featured world-class finishing across the board.

“I was trying to cut inside and get a shot,” admitted Baird, who finished with a goal and two assists. “What a finish from Sam.”

The goal kept RSL (2-1-4, 10 points) unbeaten in two matches since Major League Soccer’s second restart during the novel coronavirus pandemic, and proved that even a team down 4-2 after regulation can find a point on the road.

COREY BAIRD TO SAM JOHNSON IN THE 95TH!

Damir Kreilach and Giuseppe Rossi each added a goal for Salt Lake, including Rossi’s first of his RSL campaign in the opening minute of stoppage time, to pull within one.

Like the anthem played before each match at Rio Tinto Stadium, and written by Utahn and Rancid drummer Branden Steineckert, RSL found a reason to “believe.”

“I just think it shows a lot of character,” Baird said. “To be two goals down … can be really tough, mentally. But for us to keep going and not give up shows the character we have. Credit to everyone on the field to get that result.”

Sebastian Blanco, who had a goal and an assist, scored in the 70th minute to break a 2-2 deadlock for the Timbers, and Felipe Mora added his first career goal in MLS play to put the Timbers (3-2-2, 11 points) up 4-2 with five minutes remaining in regulation.

But RSL head coach Freddy Juarez got exactly what he needed out of each of his subs — in addition to Rossi and Johnson, Everton Luiz took kover for Justin Meram as a second-half replacement — and the natural goal scorers did the rest.

“I think the fresh legs came in at the right time,” Juarez said. “They definitely made a difference.”

After a sluggish start, including Diego Chara’s goal just 6 minutes into the match, RSL found its offense that has been renewed since the post-MLS is Back Tournament break, having scored eight goals in two matches.

The visitors tied a club record for a single match with 29 shots, including eight shots on target. Even when they trailed 2-1 at halftime after goals by Baird and Portland’s Jaroslaw Niezgoda, the players felt like they’d get a chance to come back.

It started with Kreilach’s flying karate kick goal just after halftime, a sequel to a similar goal that made waves on social media in the 2018 MLS Cup playoffs against Los Angeles FC.

The set up a wild final half-hour, ending with Johnson’s strike to earn a valuable road point.

“I felt people grab me; I don’t know where it was coming from,” Juarez recalled about the goal. “But it was needed; it was nice to see that from the guys.

“The players just never stopped. That was the mentality. There were opportunities … and we were going to have to scrap for those goals.”

The game capped a wild 72 hours for Salt Lake, which joined much of the sports world in boycotting its match Wednesday against LAFC. The next two days followed a torrential whirlwind of news from the front office, ending with a leave of absence for owner Dell Loy Hansen while both MLS and the National Women’s Soccer League began to investigate allegations of racially charged language from the real estate magnate who owns three professional clubs in the organization.

On top of all that, Justen Glad missed Saturday’s match for family reasons, leaving the club with just two center backs in Nedum Onuoha and Marcelo Silva. RSL expects him back in time to play Wednesday.

Given all that was happening in the background, it’s easy to see why RSL celebrated Saturday night’s draw as if it were a win.

“It doesn’t happen very often. This team has pride in keeping the ball out of the net,” Juarez said. “The good thing is, we scored some goals. And better than that, we’re keeping the team’s spirits up, which is tough in these tough times.”

Salt Lake will host Seattle Sounders FC at 7 p.m. MDT Wednesday. The match will be broadcast on KMYU and ESPN+.