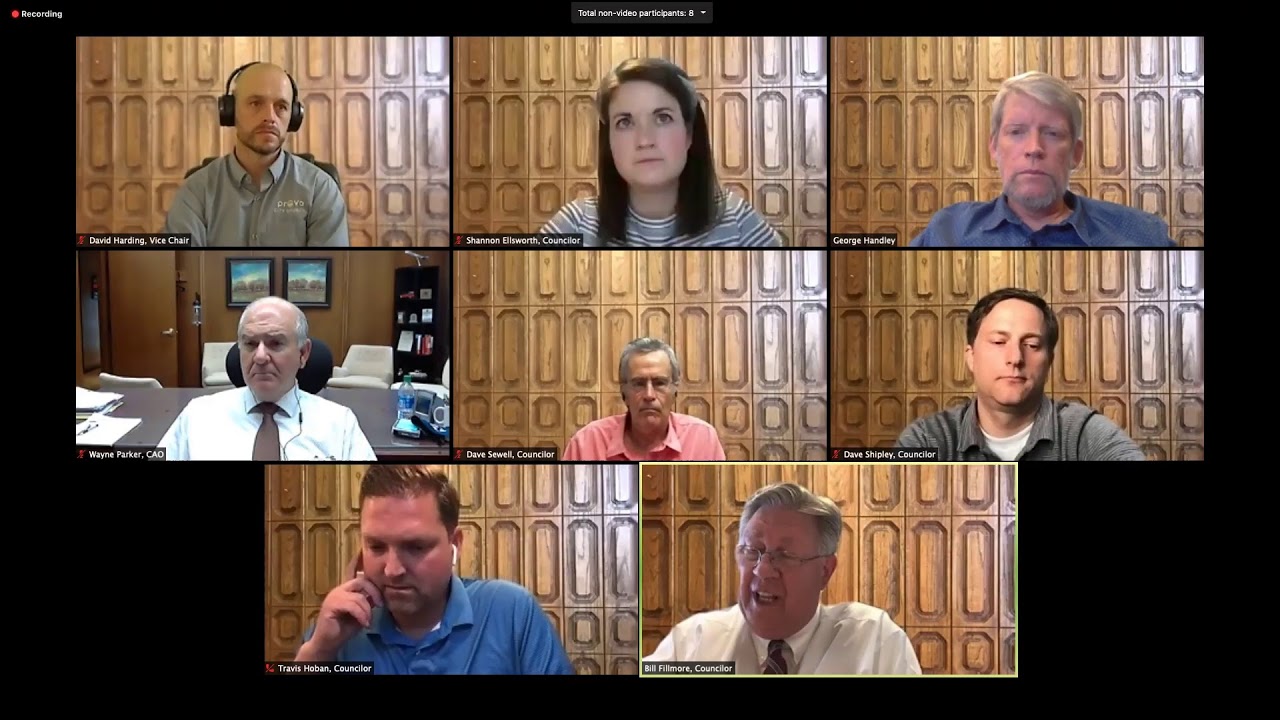 PROVO — The mayor of Provo formally rejected the city council’s proposed ordinance requiring face coverings in public with a veto Thursday. The city council, in turn, quickly voted to override her veto.

After Mayor Michelle Kaufusi's veto, which was received Thursday via letter to the council, Provo's city council members quickly called a meeting to decide what to do about it. The decision to override her veto received a vote of 6-1 in favor of the original ordinance.

Councilman Travis Hoban, who represents the council's District 4, was the lone 'nay' vote. The decision required at least five of the seven members to vote in favor of a citywide ordinance that originally received unanimous support.

“I want to make it clear to the public that this is not a rift in the city leadership. We know and respect each other,” said council chair George Handley during a meeting that lasted just under 40 minutes. “I’m saddened by the anger that I’ve seen directed at the mayor. I know the mayor and my fellow city council members well enough to know that we see things differently; sometimes we disagree, but we are good and honest people trying to do the right thing.”

Still, the vote was finalized with just the one objection. Others on the council said they had minor grievances with some language in the ordinance — council member Bill Fillmore, who represents District 1, said he would prefer a fine be taken out of the ordinance, for example — but none that would cause them to vote against the ordinance.

The timing was key for those members, who cited an incoming rush of as many as 70,000 students at nearby Brigham Young University and Utah Valley University in the coming weeks. BYU, which is located in the heart of Provo, will begin a hybrid model of in-person and online classes beginning Aug. 31. UVU opened its doors to the fall semester last Monday, Aug. 24.

The basics of the mask ordinance passed last night. pic.twitter.com/dv9eOZiYaT

“Some ordinance now is better than no ordinance,” Fillmore said, adding he hopes citizens will be more mindful of those who have a verified reason for not wearing a mask.

Specified exemptions include children under 5 years old, individuals with a medical and mental health condition that prevents wearing a face covering, and those engaged in strenuous physical activity not reasonably conducive to mask-wearing.

Others seconded their voice to say they hoped the ordinance would be applied with kindness and education.

“I don’t want to light up the 911 switchboards with people snitching on their neighbors,” Fillmore said.

Businesses are also required to post signage for patrons and employees to wear face coverings.

Those who violate the ordinance could receive a citation of up to $55, and those who organize such gatherings without requiring masks could face fines of up to $500.

The mandate, which goes into effect immediately, will expire on Nov. 15, unless the council renews it by or before Oct. 20.

Kaufusi was excused from the online meeting due to a prior family engagement. But she submitted a lengthy letter to the council outlining her reasons for vetoing the ordinance prior to the meeting.

“I believe that you and I have the same destination in our sights: a safe and vibrant Provo through coming months,” wrote Kaufusi, who has publicly advocated for a program of voluntary mask-wearing compliance in the city. “We also share a desire to see the highest possible rate of compliance with state health guidelines.

“Our difference is over the right path to fulfill our desire to get to that destination.”

Kaufusi also outlined concerns over the mandate, including a lack of enforcement from law enforcement and “not a single major community partner in this valley” who has encouraged a mask mandate.

Provo Police Chief Rich Ferguson has also publicly opposed the mandate. Enforcement was among the key arguments against the mandate.

“We were hoping that they would listen to her position, but there are such strong feelings on this one,” Provo deputy mayor Isaac Paxman told KSL TV. “It’s a tough time for police officers; do we want to have more citizen-police encounters? That can be messy.

“The mayor is really sensitive to that. Let’s cheer our residents on. These are good people who will do the right thing.”

Added Kaufusi: “As you know, my preferred path is to continue to educate and encourage and cheer my neighbors along. It’s a path that has been working to a great degree; Provo remains at the yellow or ‘low’ level of restrictions from the state.”

Earlier Thursday, the Provo City School District announced that Friday night's rivalry football game between Timpview and Provo was canceled as a result of the pandemic. Three classes at Provo High have been put into quarantine, including multiple athletes and coaches, according to a source.

Provo's mandate is loosely based on an analysis by Brigham Young University professors that revealed masks represent the most effective and cost-efficient way to slow the spread.