When the NWSL Challenge Cup needed a goal, Houston's Rachel Daly was elated to oblige 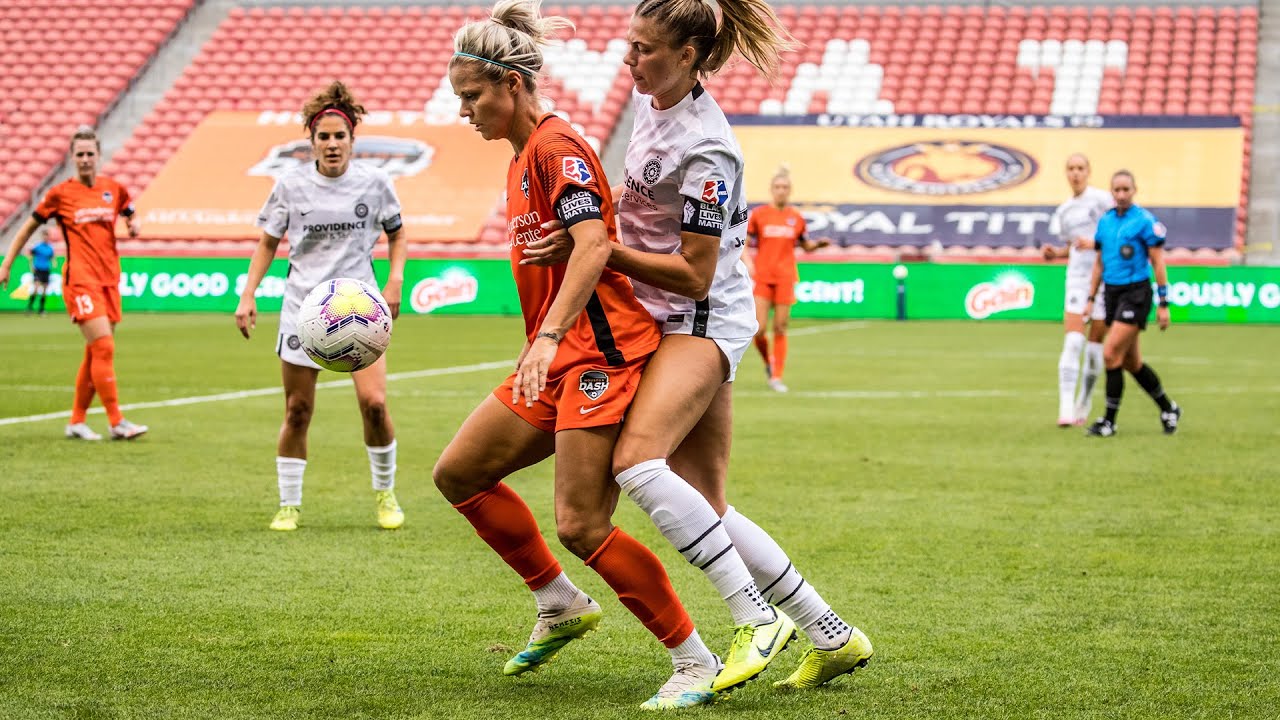 SANDY — The collective roar when Rachel Daly’s goal hit the back of the net wasn’t just her, or her teammates from the Houston Dash, even if that's the bulk of who was in the stadium.

It was every women’s soccer fan crying out with pent-up joy.

Daly’s goal in the 69th minute of Houston’s 1-0 win over the Portland Thorns in the NWSL Challenge Cup semifinal Wednesday morning at Rio Tinto Stadium was like water on a hot day, or manna as the Children of Israel wandered 40 years in the wilderness.

Maybe everybody involved in women’s soccer needed that one.

The goal snapped a 405-minute goalless drought across 3½ matches in the tournament, in which three of the four quarterfinals ended in a penalty shootout. And even if her side outlasted host Utah Royals FC in one of those shootouts, Daly didn’t want to go there again.

“We wanted to win in regulation,” she said. “It takes a lot of emotional energy and frustration to go to penalties.

“We’ve had a lot of chances in the last few games, and we haven’t converted them,” Daly said after she tied her tournament-best third goal. “That was something for me as a striker that I needed to work on and put a goal away — for myself and for the team.”

Daly’s drought-busting goal didn’t happen without help from that team, as she was quick to mention. From Kristie Mewis’ corner kick to Sophie Schmidt’s header that centered a heading chance from Daly on frame, the British striker was quick to give credit where credit was due.

“I think it was an unbelievable set piece,” Daly said. “Kristie’s ball was excellent. Sophie’s header across the goal was excellent. All I had to do was pick up the scraps; they did the hard work.”

The Dash (3-2-1) will face the Chicago Red Stars, who survived Sky Blue FC 3-2 in the other semifinal.

Goals were scored in bunches In the late semifinal. Bianca St. Georges opened the floodgates with her first professional goal en route to the Red Stars' 2-0 halftime lead, and assisted on another in the second half.

Rachel Hill and Savannah McCaskill also scored to put Chicago up by as much as 3-0 in the second half.

But Sky Blue came back.

Evelyne Vienes pulled one back for Sky Blue in the 72nd minute, and Chicago’s Julie Ertz redirected Midge Purcell’s cross into her own net to give Sky Blue life just five minutes later.

In late June, the NWSL became the first pro sport to return to play. Or at least, it was the first professional outdoor team league to make a run at some form of a season after the coronavirus-induced hiatus shut down virtually all sporting events at every level in the United States.

A few individual sports like golf, auto racing and rodeo attempted to press on in limited capacities. But the NWSL was the first to signal to the wider sporting community that a nine-team league — or eight, after the Orlando Pride withdrew from the tournament for an abundance of positive tests for the virus — could still find its place in a world that was largely without sport, focused on things of much greater magnitude, both physical, financial and social.

For a while, the NWSL had its own platform, its own showcase to gather support for a league that was still, for all intents and purposes, in its infancy. While health, safety and the need for the financial assistance of a broadcaster like CBS certainly played the heaviest role in the league’s return, it also must be noted that the platform provided a chance to win more fans to the competition.

To do that, though, the players had to showcase good football. And for most neutral observers, that meant scoring goals.

Some soccer purists will disagree, enjoying the nuance and finesse of a defensive battle just as baseball fans can find joy in a pitchers’ duel or college football fans can dissect defensive backs and linebackers of that sport’s best defenses. But for at least as many others, the game needs goal-scoring.

“It’s nice to score a goal in open play, and not to have to rely on penalty shootouts,” Houston coach James Clarkson said. “I’m very happy, but all the credit goes to the players. They were fantastic.”

Why so much defense? Maybe it’s because of fear of falling behind.

No team in the Challenge Cup has come back from a deficit — any deficit — to win a match, and only three have pulled even for a draw. All eight teams are a combined 0-13-3 when trailing at any point during the tournament.

Still, none of this should take away from the headline stories of the semifinals, like the Dash beating Portland for the first time in nine tries or goalkeeper Jane Campbell’s third shutout of the tournament.

But through four quarterfinals, only one goal was scored — and that by the eighth-seeded Portland Thorns in a stunning 1-0 win over two-time defending NWSL champions North Carolina.

Heat might have played a factor; temperatures soared in the triple digits on the artificial surface at Zions Bank Stadium in Herriman. But that doesn’t tell the whole story, because Wednesday’s one-goal game was played on natural grass at Rio Tinto Stadium, with a cool breeze and thunderstorms floating overhead.

More likely, the tournament’s format did, with a short turnaround between matches that were often played every three or four days. Add in the shortened preseason because of a pandemic-forced hiatus that also shut down training for most teams, and even FIFA’s temporary five substitution rule that the NWSL adopted and mid-half water breaks barely aided player recovery.

For whatever reasons you choose to believe, goal-scoring was down.

And in one moment, Daly reminded soccer fans of the beauty in the beautiful game and the excitement that even a little offense can bring.

Maybe she can do it again Sunday.

“She’s been fantastic, but that’s exactly what we want from her. She’s a leader on the team, her and Jane, and she’s been fantastic,” Clarkson said. “Hopefully she can go on and get another one to win the Golden Boot. But the attitude she brings every day is fantastic.”