Woman says she rescued mother of puppies found on snowy mountain; rancher says she has his herd dog

AVON, Cache County — A northern Utah woman says she finally located an abandoned Great Pyrenees named “Grace” after searching for the dog since December in the Monte Cristo area of Cache County.

However rancher Lane Jensen says the dog Shelly Rovira rescued is a case of mistaken identity, it’s his herd dog Fergie that was recently taken off his property near Avon. And he has asked the Cache County Sheriff’s Office to look into the matter.

The story of Grace began in December when snowmobilers noticed a dog in the mountains with three puppies. On Dec. 1, Kat Perry and her boyfriend discovered the animals stranded in the Ant Flat area east of Pineview Reservoir. They called for help saving the dogs, prompting county search and rescue crews to bring a sled and carry the puppies to safety.

The mother, however, ran away. Authorities believe she had left her sheepherder owners to give birth, and they left the dog behind while avoiding a snowstorm.

Rovira has been looking for Grace since then.

According to a post written by Rovira this week on the Facebook group Save Momma Dog the Great Pyrenees — “Grace,” two people noticed an “emaciated dog laying in a field next to a flock of sheep” Saturday while riding ATVs.

Rovira wrote that she asked the people who found the dog to take her to its last known location, but they couldn’t find it. She went back up Sunday and made contact with the sheepherder.

She wrote that the herder offered to take her and her friend to the dog after they showed him a picture. She then asked to buy the dog, and the herder said to come back Tuesday. Rovira wrote she couldn’t wait until then and offered $400 to buy the dog.

According to her post, the herder then took her to the dog. She wrote that she slipped $400 in a backpack hanging in a nearby tree and took the dog with her.

But Jensen says the dog Rovira took is actually his Akbash named Fergie and that Rovira took Fergie off his private property. He pointed out that Grace was originally found between Hardware Ranch and Monte Cristo — nearly 40 miles away from his land near Avon. 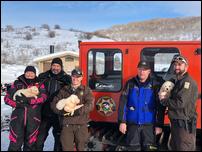 Weber County Search and Rescue Lt. Mark Horton said he was up in Monte Cristo preparing for the winter season Sunday when he got a call about a group of puppies and their mother in need of rescuing.

“This last Friday we were moving sheep up on our property, and we took our female Akbash up to help watch the sheep,” Jensen said. “Then we got a call on Sunday from our herder who said he hadn’t seen the dog that day.”

He said three of his lambs were killed by coyotes Sunday night because his sheepdog wasn’t there to protect them.

Jensen said the herder doesn’t speak much English because he is from Peru. He said the herder told him that he tried to talk to Rovira and her friend but that he couldn’t quite understand them and didn’t know what they were saying.

“I got the impression that he was intimidated by them,” Jensen said.

Rovira said in a text message Wednesday that the herder spoke enough English to direct them to the dog.

“As far as we know, we paid the man who said he owned the dog. We did everything we thought was legal and above board,” Rovira said. “If they choose to file charges, I guess they will have to prove ownership of the dog in court.”

Yet Perry said the dog Rovira posted about is not the dog she found that snowy day in December.

“I can honestly say that’s not Grace,” Perry said. “There’s no way you could pick Grace up like that and put her around your shoulders.”

Perry also said the dog’s physical features didn’t match Grace’s. She said the dog’s head was too small and that she was taller and lankier than Grace.

Rovira is confident the dog she has in her care is Grace, saying the dog had the same brown collar as the Pyrenees they found in December and that a veterinarian said it looked like the dog had puppies at some point.

According to Jensen, he learned about Rovira’s Facebook post when the director of the Utah Wool Growers Association texted him the link to it because Jensen had reached out to the association when he realized his dog was missing. He said he immediately noticed his property — and dog — in the pictures that accompanied Rovira’s post.

Jensen then reached out to Rovira saying she had his dog.

“They kind of let us know they weren’t interested in talking to us or working with us,” he said.

Now the matter may be in the hands of law enforcement.

“The Cache County Sheriff’s Department has received a report of a stolen dog, and we are currently investigating it,” said Lt. Mikelshan Bartschi. “We are looking to corroborate and substantiate any claims by both parties. Because of the distance between them, it’s going to take some time to investigate.”

He declined to comment further because it is an active investigation.