SALT LAKE CITY — As you’re well aware, Utah will move its coronavirus pandemic risk assessment from high to moderate, or red to orange if you prefer.

That comes with a pair of caveats. Gov. Gary Herbert and state health officials have reminded residents that high-risk populations — those over 65, those who are immunocompromised, and those with underlying medical conditions — are to continue following high-risk restrictions. There could also be situations in which some areas of the state may have to revert back to high-risk restrictions.

As the state moves to orange, what would cause it or some locations within the state to go back to red?

Dr. Angela Dunn, the state’s epidemiologist, said health officials were working on creating "specific metrics" to guide any decision like that. Factors would likely include hospitalizations and community spread, which is when health officials can’t determine how someone got the disease.

Both of those statistics have remained relatively low in Utah since the pandemic hit the state in March. As of Thursday, only about 10-15% of Utah’s 4,672 cases came from community spread. That number, Dunn said, has declined as social distancing has been implemented, while the number of household spread cases has risen.

Meanwhile, only about 8.3% of the state’s cases have led to hospitalization over a period of 1½ months. On April 17, when the state issued its Utah Leads Together plan, it noted that intensive care unit bed utilization was "stabilized at 16%."

"If we start to see a surge in our medical systems, (and) if we start to see cases that have a lot of community spread — so we can’t identify where they got COVID from — those are going to be signs we’re looking at our policies again and see what interventions might be useful," Dunn explained during Wednesday's press briefing.

Even as the state is set to ease back restrictions, there are still plenty of guidelines Utah health and government leaders are asking residents to follow. Those include keeping at least 6 feet distance between others while outside and using face coverings or masks in situations where that is impossible, like in businesses or grocery stores. Large gatherings are limited to 20 people and nobody who is feeling sick should attend those gatherings, Dunn said.

"We've done an excellent job up until now," she said. "We haven't had a lot of legal restrictions across the state, so I think a lot of our success in slowing the spread is due to individuals recognizing that there is a risk and adhering to social distancing on their own. We expect them to keep doing so."

As Utah moves into the moderate risk phase, health department teams are also working to assess hot spots in the state and working with local health agencies in those areas. The first hot spot was in Summit County at the beginning of the outbreak; it’s now "certain neighborhoods" in Salt Lake and Utah counties, Dunn said. 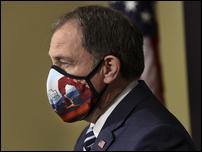 Red to orange: What to expect when Utah switches to 'moderate risk' on May 1

Utah Gov. Gary Herbert issued an executive order on Wednesday night to begin easing restrictions and placing the state on “moderate risk” protocols for the coronavirus pandemic starting on Friday, May 1, at 12:01 a.m., as previously announced.

Contact tracing and widespread testing are two ways the state is able to pinpoint hot spots. About 76,000 Utahns have downloaded the state’s Healthy Together app as of Thursday, according to Dunn. The app was developed to help the state better contact trace and get people to testing spots if they develop symptoms.

Should a hot spot lead to a need for further restrictions, those local areas would work with the state for a temporary return to "red" restrictions, Herbert explained on Tuesday.

And that's what would need to happen to move back from orange to red and how it would be conducted.