SALT LAKE CITY — An 18-year-old has been arrested in Texas and charged in connection with the killing of a man in West Valley City during a drug deal, according to court documents.

Ian Cameron Reddick, of West Valley City, who is also known as Ian Knighton, was charged Friday in 3rd District Court with murder and aggravated robbery, both first-degree felonies, and obstructing justice, a second-degree felony.

On Feb. 5, West Valley police were called to the 6400 block of Wakefield Way on a report of a man lying in the street. Officers arrived to find Manuel Andres Martinez, 20, dead of multiple gunshot wounds, according to charging documents.

According to the charges, a witness heard gunshots from inside a vehicle stopped in the street, and then saw Reddick get out of the front passenger seat and “pull the rear passenger (Martinez) out of the vehicle into the street while simultaneously taking a handgun from Manuel.”

A man who was with Martinez told police that the two of them had arranged earlier in the day through Snapchat to meet with Reddick to buy dab, a marijuana extract with higher concentrations of THC than regular marijuana. Martinez and his friend planned on paying $3,600, which Martinez was holding, the charges state.

When police started tracking Reddick after the killing, they learned he was traveling east on I-80 and was near the Utah-Colorado border, according to charging documents. By Feb. 8, investigators had tracked him to the Houston area, the charges state.

U.S. marshals located Reddick in a motel in Harris County, Texas, and arrested him. In his motel room, they found a little over $3,600 cash, according to charging documents. 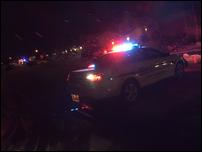 Witnesses performed CPR on a 20-year-old man who was later pronounced dead at the scene by medics. He was identified Thursday as Manuel Andres Martinez, West Valley City police confirmed via Twitter.

When interviewed by police, Reddick said the gun belonged to his friend, the driver of the car that night, and was between the driver’s seat and center console when he got in the car, with the barrel pointing down and the grip exposed, the charges state.

When Martinez got into the car, he “immediately started attacking,” Reddick claimed, according to charging documents. He said Martinez tried to grab the gun in the car and that the two of them were soon in a struggle over the gun.

“Reddick was able to wrestle the pistol away from Manuel and that’s when Reddick just started shooting. (Reddick’s friend) stopped the vehicle and Reddick got out of the car and pulled Manuel out of the car and he and his (friend) drove away,” Reddick told authorities, charging documents state.

As of Friday, Reddick was being held in jail in Harris County, Texas, on $1 million bond awaiting extradition back to Utah.