SALT LAKE CITY — As January winds down, so do most of our well-intentioned New Year's resolutions. They generally start out feeling manageable but end up taking on mammoth proportions. Like climbing a mountain. Alone. With no equipment.

For some mountaineers, summiting Mount Everest is their ultimate resolution, and no climber can successfully summit without enlisting the help of mountain guides called Sherpas. In the words of British mountaineer Kenton Cool, "Sherpas are so important."

Sherpas "know the culture, the area, they know people," Cool told the BBC. "They have this phenomenal energy and power on the mountain. … (Sherpas are) the backbone of any expedition."

Erik Weihenmayer, a blind mountain climber who has summited Everest, is one of my newly discovered heroes. In a recent Entrepreneur Middle East article, the author and motivational speaker said that by telling his story he aims to take the excuses away. "… as a blind guy, I climbed mountains … I built a great team (Sherpas included), because there are a lot of things I cannot do, so I need people to support me and lift me up," he said.

Most notably, while many use our adversity as an excuse, Weihenmayer uses his blindness as fuel. "Obstacles encountered can either stop us in our tracks," he says, "or we can figure out a way to harness them and propel ourselves to new places that we would never get to in any other way."

Speaking of adversity, I've had my share. Eight years ago this week, I suffered a traumatic brain injury in an accident. Throughout unrelenting stages of pain, confusion and exhaustion, I determined to "hold on" until I had recuperated. But instead of the doctors' projected six to eight weeks of recovery, my accident was the beginning of a different life altogether.

Brain injuries are unpredictable, at best. So for some reason, I was able to write for a time after my accident. Then several months later, late-onset PTSD kicked in — and that was the end of writing as I had known it.

If that sounds a bit dramatic, it's because it was.

After a few years, I tried to start my writing career back up. And failed miserably. A year later, I tried again. And failed. And then again. And repeat. Notwithstanding my progress in other areas, the executive function skills required to write have continued to elude me. Each failed attempt was increasingly disheartening until I basically gave up. I felt permanently trapped at the base of my writing mountain.

Midway up these mountains, I began to realize how much better equipped I was becoming to help my five kids with their own climbing expeditions. Since my recovery had led through intricate paths of various brain styles and mental challenges, my sherpa skills were developing far beyond what their pre-accident capacity had been.

But in the meantime, a myriad of important recovery mountains loomed large. Necessity dictated that I start climbing them — one step, one mountain at a time. Some of my most difficult mountains have been sleep and memory problems, depression, post-traumatic stress disorder, chronic fatigue, general and social anxiety, OCD and bipolar disorder.

Midway up these mountains, I began to realize how much better equipped I was becoming to help my five kids with their own climbing expeditions. Since my recovery had led through intricate paths of various brain styles and mental challenges, my Sherpa skills were developing far beyond what their pre-accident capacity had been.

From an outsider's perspective, most of my kids' metaphorical mountains aren't especially difficult ascents. But I'm no outsider; and for a variety of bonafide reasons (brain and learning style differences, for example), many of their climbs, for them, have equated to summiting Mount Everest.

When a new mountain looms on their horizons, it's not unusual for my kids to tell me how difficult it's going to be for them to climb. Too hard and, for sure, impossible to summit.

As their Sherpa, I listen and tell them I hear them. Then I help them prepare to navigate their climb because staying at the bottom of the mountain is simply not an option. I've also learned to ask for and embrace help on behalf of my kids. More Sherpas — especially those with different skill sets than mine — mean a higher rate of success for the climber.

My daughter. My Sherpa

A few months ago, I received an email from an editor asking if I would be interested in writing again in the new year (2020). I had been trapped at the bottom of my writing mountain for a few years, and the idea of trying another ascent was terrifying. But I considered it, briefly, and then got right down to the business of navigating the holiday season.

My oldest daughter came to visit for Christmas. A year into her first salaried job out of college, she is facing a number of brand new, fairly scary mountains. With my imperfect but well-used Sherpa skills, we discussed ideas and strategies she could use to successfully climb them. "You can do this, " I told her. "I've watched you do so many hard things in your life. Even when you've fallen and had to get back up, you've never once not survived. You've totally got this."

Late Christmas night, after most of our family had begun their annual post-Christmas hibernation rituals, my daughter stayed up to help me clean the kitchen.

She stopped, looked at me, and asked, "Mom, when are you going to start writing again?"

"I don't know," I said, teary-eyed, "I'm not sure it's possible. I've tried and failed so many times that I'm honestly scared to try again. As in, panicky scared."

"Mom, you can do it. I know you can. You're smart. You have lots of great experiences to share. You can get back up and try again, Mom. You've totally got this."

My daughter. My Sherpa.

I cried myself to sleep that night and woke up with new resolve to write.

This article is the first step up my mountain. Already, I've had to ask for lots of help organizing my time and my thoughts into something cohesive. And the amount of encouragement I've needed to simply not give up on this one single article is moderately embarrassing.

My writing isn't the same. It's a more difficult process that I don't like or feel comfortable with. But it's time for me to stop making excuses and start using my adversity as the force I need to propel my ascent — one step at a time — up the mountain. It'll be hard and slow, but I'm OK with that.

Because with my Sherpas, the backbone of my expedition, I think I've got this. 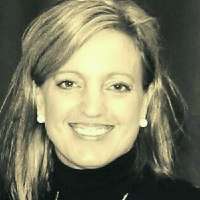