SALT LAKE CITY — The Utah Department of Health is moving forward with an HIV prevention campaign — this time, without the controversial condoms branded with Utah-themed sexual innuendos.

The condoms, which played on Utah-centric themes with phrases like “Uintah sex?” or “SL,UT” with a star marking Salt Lake on a map of Utah, were meant to bring attention to the department’s HIV awareness campaign launched Jan. 14.

Though the campaign followed in the footsteps of neighboring states that have also used locally-themed sexual innuendos to draw attention to sexual health issues, Gov. Gary Herbert asked the department to stop distributing the condoms the day after the campaign launched.

“The governor understands the importance of the Utah Department of Health conducting a campaign to educate Utahns about HIV prevention. He does not, however, approve the use of sexual innuendo as part of a taxpayer-funded campaign, and our office has asked the department to rework the campaign’s branding," an earlier emailed statement from the governor's office reads.

The department began pulling the condoms from the organizations to which they had been distributed, took down billboards advertising the campaign, and even pulled down the website HIVandme.com, which provides more information about HIV prevention, testing, treatment and persistent myths.

As of Tuesday, the campaign and website were back up and running.

“The Utah Department of Health (UDOH), in consultation with the Governor’s office, has finished a review of all creative aspects of the “H is for Human” HIV prevention campaign,” health department spokeswoman Jenny Johnson said in an emailed statement.

“With regard to the themed condoms, the UDOH is making a concerted effort to retrieve those which were provided to local partner agencies, and which had yet to be distributed to individuals at high-risk of contracting HIV. The condoms came in ‘wallets’ which are small cardboard holders. The wallets with the Utah-themed messaging will be removed and destroyed. The latex condoms will then be redistributed to partner agencies as requested per normal procedures.” 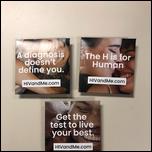 Gov. Herbert said he does not “approve the use of sexual innuendo as part of a taxpayer-funded campaign” and asked the UDOH to stop distributing Utah-themed condoms.

The condoms were already in wrappers inside the cardboard “wallet” and will simply be redistributed without the wallets.

The entire campaign was reviewed by the department, then again by the governor’s staff before it was reinstated. The campaign will continue exactly as it was before, except without the Utah-themed condom wrappers, Johnson said.

Michael Sanders, a member of the Utah HIV planning committee that created the messaging for the new campaign, said the committee went through all the “proper channels” and got approval from Tom Hudachko, director of communications at the Utah Department of Health, before launching the campaign.

“We did not go rogue with this,” Sanders said Thursday, adding that Hudachko was fired. The governor’s office confirmed later that Hudachko was not fired but said it could not further discuss personnel matters. The health department declined to comment on Hudachko’s employment status.

When asked whether the governor’s staff would have to review future campaigns by the department, Johnson told KSL.com nothing has changed yet in regards to the approval process — though she’s not yet sure whether it will.

“Up until late last night, it was making sure that the campaign got put back up and that the governor’s office had signed off on it. So I can’t speak to what may happen in the future, because those decisions haven’t been made yet," she said.

The department initially spent about $353,000 on the entire campaign using federal health grants. Johnson said she is still unsure what restructuring the campaign will cost. The department took down bus wraps, billboards and more, and the cost to reinstate those is unclear, she added.

When asked whether it was frustrating to the department to roll back the campaign, Johnson said, “It certainly takes a lot of added staff time and resources that we weren’t necessarily anticipating, but, yeah, I think people can probably read into that what they will."

“We didn’t expect this, and our priority was to make sure that that education was out there, and we just had to go through these extra steps to make sure that it was appropriate and cleared by the governor’s staff,” she said. “… But right now, the website is back up and we have excellent information that we’re really excited about and hope people utilize.”