Have You Seen This? He spent 20 Christmases alone, but not this year

OLDHAM, United Kingdom — Many people associate Christmas with love and joy and hope, but it may not be that bright and cheery for others.

Many people around the world who celebrate Christmas don’t have presents or special meals, and many spend the whole holiday season alone, just like Terrence in Oldham, England.

He was recently featured on BBC Breakfast, a TV morning show in the U.K. In the video, a cheery Terrence tells reporter Dan Walker a little bit of his story.

Despite his jolly demeanor, Terrence struggles with loneliness, especially during the holidays. Terrence said he used to spend Christmas visiting his mother, bringing her dinner and wrapping little presents that he delivered in a pillow case.

One year she told Terrence that if it wasn’t for him, she wouldn’t get presents at Christmas. It’s something that he has remembered often during his last 20 Christmases alone.

But this year is different for Terrence. This year he’s participating in Age UK, an organization dedicated to helping the elderly live healthier lives and stay connected in the community. Through this program, he is spending Christmas dinner with a friend he made this year called Nancy.

But that’s not the only good news for Terrence. Walker is there to give Terrence two more surprises from a group of students at Oldham College: a tree and a visit from carolers to sing his favorite Christmas song, "Silent Night."

When the surprises are revealed in turn, Terrence is so moved that he immediately starts crying and doesn’t stop. They are clearly happy tears, but it still breaks your heart. At the same time, it’s so joyous that it’s more than enough to warm the Grinchiest heart.

As is often the case, it’s the little things in life that mean a lot, and Terrence is perfect proof.

The video runs for 5 minutes and 20 seconds, but it’s well worth watching the whole thing. Skip to the 2-minute mark if you want to only see the surprises. 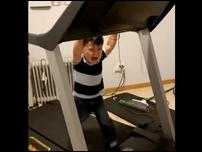 Have You Seen This? Tot traps himself on treadmill

When you become a parent, the boundaries of time, physical space and cleanliness change overnight.
×
Martha Ostergar