'This literally saves lives': Why one Utah mother is grateful for donated breast milk

SALT LAKE CITY — According to the Mountain West Mothers’ Milk Bank in Salt Lake City, 70% of mothers with babies in the newborn ICU are not in a position to breastfeed their child.

On Thursday, the nonprofit announced it became the 28th fully operational accredited milk bank — meaning donated milk is processed and distributed locally to help both mothers and babies in need. Beforehand, collected milk was sent to Denver to be pasteurized and the bank said if milk thawed en route, it was lost.

"One night I woke up with like, severe back pain and I was like, ‘OK, I need to run to the hospital. I know that something's wrong,” Lloyd said.

Fortunately, the delivery went smoothly and although Evelyn is a preemie, she is healthy. However, Lloyd was experiencing severe preeclampsia.

“I continued to have really bad back pain,” she described.

Lloyd was transferred from American Fork Hospital to the Utah Valley Hospital ICU. She only got to hold her baby once before leaving.

She wasn't there to breastfeed Evelyn, which was devastating to her.

"I've always wanted to breastfeed my baby,” she said.

In her absence, the hospital gave Evelyn milk donated from other mothers. Intermountain Healthcare's Michele Carnesecca, a registered nurse and an International Board Certified Lactation Consultant, said they heavily rely on volunteer mothers to satisfy the high demand for breast milk.

"If they have extra milk, they're screened, they donate their milk, and then it's pasteurized, and then it's tested again; so, completely safe," Carnesecca said. “There's never been an incident where there's been a problem giving it to a baby.”

She said the pasteurization process removes any potential viruses and bacteria.

Carnesecca said this is extremely helpful "for moms, maybe, who don't produce enough milk. Sometimes it's a bridge until her milk comes in."

She said it’s also helpful for babies who are losing weight or have low blood sugar.

Lloyd said, “I was really happy that my baby could have breastmilk just because I've read up on the benefits.”

More Your Life Your Health: 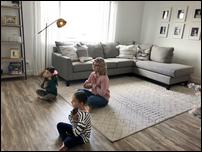 Finding time to keep kids active and healthy during the holidays can be a challenge. But it’s all about keeping fitness fun for little ones.

Caresecca said breast milk is also easier for babies to digest than formula and said studies show babies who are breastfed have fewer incidences of pneumonia, asthma and ear infections.

The bank also moved to and equipped a new facility. It hosted a ribbon-cutting ceremony Thursday morning with its founding sponsors, including Intermountain Healthcare and University of Utah Health.

Carnesecca encourages mothers with extra milk to donate "because we've got to feed these babies,” she said. “Donate, donate, donate!”

Today, Stephanie is back with her baby at American Fork Hospital to feed Evelyn on her own, and will likely be with her at the hospital through the holidays. "There's no place I'd rather be!" she said.

Carnesecca said people who are interested in donating need to be screened first at the Mountain West Mothers' Milk Bank through a blood test and then can donate milk at an approved facility. Visit giveyourmilk.org to learn more about how to become a milk donor.

Women who smoke or are on certain medications will not be allowed to donate, and there is no compensation given to women who choose to donate. “It's all from the goodness of their heart, and so we really would encourage lots of moms to donate if they can,” Carnesecca said.