WEST VALLEY CITY — Brittney Roylance was experiencing a low point in her life and was in the midst of a two-week detoxification process with help from the Volunteers of America program when she met someone who has helped her to change her life.

“It has opened doors for me,” the Ogden native and mother of four said Wednesday.

Since meeting Allison Heffernan, an outreach and education program director with Take Care Utah, Roylance has been able to enroll in Medicaid, which has helped her get access to much needed substance abuse treatment and continuous mental health medications.

“People like me often feel ineligible or like they were just slipping through the cracks and don’t seek it out,” Roylance said. “We don’t feel like we deserve it ... you have to really want it and sometimes, we just don’t.”

Heffernan makes it a point to “meet people where they are” in life and visits detox centers, jails and other places where vulnerable people might need help accessing benefits for which they qualify.

Recent changes to the Medicaid program have extended coverage to 37,232 Utahns, including adults without children, as well as parents, but it still leaves out an estimated 60,000 who earn between 100% and 138% of the federal poverty level and don’t qualify.

“And now, we just wait,” she said Wednesday during the organization’s annual conference.

Utah leaders have filed the state’s latest request for the federal government to allow up to 20 different changes to how the state administers the Medicaid program. While it is unknown whether the feds will approve any part of it, advocates believe 2020 will be the year they’ve been waiting on.

“I believe we are on the path to full and clean Medicaid expansion,” said Matt Slonaker, executive director at Utah Health Policy Project. “There will be bumps on the road, but we are on that path.” 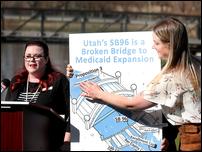 Lawmakers and advocates’ opinions differ on how much partially expanded Medicaid is costing the state — and what should be done after the federal government informally denied enhanced funds two months ago.

Utah voters approved a ballot initiative to expand Medicaid, but Utah lawmakers said the plan was financially unsustainable and delivered a different plan, including four phases. The first two have been rejected by the Centers for Medicare and Medicaid Services on the grounds that the entire Affordable Care Act is under threat in the court system.

“There is no state that has been working harder than all of you to extend coverage to people who need it,” said Joan Alker, director at the Georgetown Center for Children and Families, who spoke at Wednesday’s conference in West Valley City. She said full expansion is the “best thing to do for children,” more of whom will become covered when their parents become eligible.

A portion of the current waiver, however, relies on a work reporting requirement, which insists that able-bodied adults seeking Medicaid coverage would have to complete an application and work training programs, as well as apply for and report back on at least 48 jobs before becoming eligible. That provision is supposed to be effective Jan. 1, but Stanford said it’s unlikely.

Alker said not a single state has effectively implemented work requirements for Medicaid eligibility, and courts have struck the provision down in at least four.

“We all want to help folks work, that’s not the question here,” she said, adding that there are plenty of other barriers to getting jobs, including child care, transportation and/or skill levels. But, health precedes work, Alker said.

I believe we are on the path to full and clean Medicaid expansion.

Roylance said that explaining gaps in her employment — mostly caused by various attempts to get help with addiction — was, at times, embarrassing. But once she was able to get coverage, things changed.

“I’m grateful for where I am today,” she said.

It is unknown whether the feds will approve any or all of the stipulations Utah officials are asking for, but at least one — the idea of an enrollment cap — was rejected in a previous waiver.

Utah Health Policy Project, along with various community partners, collected and submitted 4,804 public comments on the current waiver proposal and how it might affect people. Those will be considered by the federal agency overseeing the decision on the latest waiver.

“It’s very clear Utahns see the issues with things like this,” Stanford said.

Should the provisions of the state’s fallback plan be rejected, work toward full expansion will begin, as the Legislature laid out. Stanford said that will mean Utahns will have full Medicaid expansion in the coming year.

This is the fifth year that the Utah Health Policy Project has convened a conference, including noted voices from around the country on various health care related topics and where the state of Utah stands on them.

In addition to Medicaid, panelists discussed drug pricing and health care costs, as well as transparency and pending proposals from Utah lawmakers to address them.

“We all want the same thing,” said Rep. Brad Daw, R-Provo. “We want access to affordable health care that is at the highest quality.”

For more information or to get help enrolling in health care coverage, visit utahhealthpolicyproject.org.