Utah officer in right place at right time, again — this time in Europe

SALT LAKE CITY — Salt Lake police officer Kevin Peck isn’t sure why he seems to have a knack for being in the right place at the right time, he’s just happy he’s able to help.

“That’s the whole reason I came into this job is to be able to do things like this,” he said.

Eight years ago, Peck, then with West Valley police, made headlines for the compassion he showed while responding to a woman who was hit by a bus, crushing her legs and trapping her underneath the vehicle.

Peck, one of the first people on scene, initially crawled under the bus to check the woman’s pulse. But after grabbing her hand and realizing how scared she was, Peck continued to hold the woman’s hand and waited under the bus with her until emergency crews were finally able to get her out several minutes later.

About a month ago, Peck was on vacation in Europe with his wife when he again was the first person to come across a serious accident.

The couple was traveling in a rural area near the border of France and Germany. Peck noted that he and his wife had actually left Germany early to return to their hotel in France to beat traffic.

“So that put us in the right place at right time,” he said.

They were driving on a narrow, one-lane road with no shoulder, when two cars collided head-on at one of the curves. Peck was right behind the car that crashed. 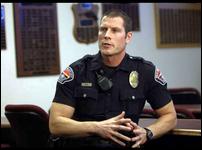 'I told her I would stay,' says officer who crawled under bus

For nine years, West Valley police officer Kevin Peck has protected and served the citizens of his city by trying to keep the streets safe from the criminal element.

The vacationing police officer got out of his car and checked on the man driving one of the vehicles.

“He was OK. Just a little dazed, bleeding from his hand,” Peck recalled.

Then he checked the second car where the driver, a woman, was “a little worse off.”

As luck would have it, the car behind the Pecks’ vehicle contained four Americans, but both of the drivers involved in the crash spoke German. Peck said it became a situation of six Americans who didn't speak German, trying to manage the scene where both victims didn't speak English.

The woman in the second car was still in the driver’s seat when Peck reached her. Her door was open and both her legs were hanging outside her car, he recalled. Although she was in pain, she was not crying or screaming, Peck said.

But then he saw something troubling.

“I could see blood dripping out of her bottom pant cuff on her right leg,” Peck said.

As he investigated further, he realized “her whole right ankle was blown out,” he said.

The bone was showing and blood was pooling on the ground below the woman’s leg. Peck, who has EMT training, said his first thought was to get a tourniquet on the leg. One of the bystanders, a woman, actually started grabbing for her belt at the same time Peck was about to use his own belt. The woman’s belt, he said, was better suited for the tourniquet and was placed on the victim.

“It seemed to slow the flow of blood considerably,” he said.

As this was happening, Peck said he was “trying to communicate with (the victim) the best I can about what I’m going to do.”

Because of the distance from the nearest city, it took between 10 to 15 minutes for emergency crews to arrive.

Peck stayed on scene until the local police were done with their work. While he was still there, and after the woman had been taken away in an ambulance, Peck said a doctor had one of the officers relay a message to him.

“He said basically, his feeling was with her injury, the tourniquet probably slowed the bleeding down enough that it saved her life,” he said.

Although he hadn’t thought about the seriousness of the injury at the time, Peck said he was happy to hear the news from the doctor.

“At the time it didn’t seem like much ... but to hear that later, that you’re able to make a difference,” he said, at a loss of words.