OGDEN — Utah consistently ranks in the bottom five states for breast cancer screening rates each year. Between juggling kids, work schedules and volunteering in the community, it’s not always easy to make time for yourself, but one Utah woman wishes she didn't put it off.

Even though the weather is changing, Tammy Spackman loves to spend time caring for her garden. “Because I never used to have time to do it,” she said. “It’s very calming, very peaceful.”

But gardening wasn't the only thing Spackman didn't have time for.

Between working full-time and caring for her family, she always put her needs last on the list.

A few years ago, Spackman went to a doctor’s appointment with her primary care physician who was conducting a routine assessment and asked her when she had her last mammogram.

“And I said, I've never had one," Spackman admitted.

Since Spackman didn’t have any risk factors, she thought she was in the clear.

"Nobody in my family has breast cancer. I don't smoke. I don't drink,” she said.

She also admits that she was scared to be screened.

"That it was going to hurt. I was afraid that they were going to find something," she said.

Her doctor immediately made her a screening appointment. "This primary care physician saved my life. She really did,” Spackman said.

Spackman was diagnosed with stage 2 breast cancer, but fortunately, her doctor caught it early enough.

“If we could find it in stage zero or stage 1, most of those women can be cured,” he said.

Parkinson said women should start annual screening at age 40. He said they use the previous year’s imaging to compare current results.

"It's important you do it year after year because changes can come up within a year,” Parkinson said.

He tells people to make it a priority, even though Utah women are often pulled in many directions.

"Many of those moms are not only taking care of children, (and) working outside the home, they're also taking care of parents and they're involved in the community,” he said.

Parkinson said only 65 percent of eligible Utah women have had a mammogram in the last two years.

“A lot of women out there who don't think there are risks, however, 1 in 8 women will develop breast cancer in her lifetime,” Parkinson said.

For women who are at a higher risk of having breast cancer, Parkinson encourages them to be screened with MRI before they turn 40.

Parkinson reminds patients who have a sister or mother who have had breast cancer to start screening about 10 years before that woman was diagnosed.

“If the mom had breast cancer at 47, the woman should start screening at about age 37,” he explained. 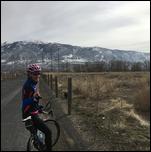 Chronic sickness is often a reason to stay at home and rest, but one Bountiful woman is determined to not let anything prevent her from the sport she loves. In the end, her dedication has paid off.

He encourages women who are afraid of being in pain during a mammogram to not let that concern stand in the way of their health.

“A mammogram shouldn't actually hurt, but it will be uncomfortable,” he said. However, he encourages patients to communicate with the technologist to make the experience as comfortable as possible.

“There's no excuse for not being screened early. We're doing a much better job now than we were 30 years ago,” Parkinson said. He said 3D mammography helps doctors be more accurate in their screening today.

“The good news is that most women will not die of their breast cancer if they're diagnosed," he said. “And if they're diagnosed in the earliest stage when the cancer is still within the duct and hasn't broken out of what we call the basement membrane, then the cure rate approaches 100%.”

Intermountain Healthcare offers "after-hours" screening and mobile mammography clinics parked across the state to make it easier for women who work to also be screened.

“Not all women can take time off during the day to come to a bricks and mortar screening facility,” Parkinson said. “If a company wants to arrange for its female employees to have a mammogram they can call us and we will show up on site and offer mammography.”

Spackman said she is so thankful she got screened when she did. She wishes she had made it a priority 17 years earlier.

“You always find time to do your nails or your hair," Spackman said. “But you know, you don't find time for the 10 minutes to do the mammogram.”

For busy moms who think they don’t have time for one more appointment, Spackman asks, “Who's going to take care of your babies if you're no longer here?”