SALT LAKE CITY — Riley Nelson, a Utah Transit Authority train operator, saw a glint of light in the distance early Wednesday morning as he carried about 60 passengers northward and away from Salt Lake City.

He believed that vehicle taillights from the adjacent freeway were simply reflecting on the rails. In reality, an SUV with an unconscious driver experiencing a medical episode had driven onto the tracks.

The train, hurtling at about 80 mph through Centerville, was less than a mile away when the 34-year-old Nelson spotted the car. With half a minute to prepare, he laid on the horn, said a prayer and activated the emergency brake on the FrontRunner commuter train, he told reporters Thursday at the agency’s rail yard in Salt Lake City.

“I just went into automatic mode,” he said.

At a few hundred feet to go, he saw two people in the car.

“At first, I thought someone was trying to grab a bag or something out of the car. And I’m like, ‘Get out of the way!’ Just before they went below my field of view, under my windshield, I saw the trooper basically just grab his arms around the guy, pull back with all he could.”

There was definitely some divine intervention going on yesterday morning.

The locomotive shook like a car traveling over a pothole and gravel sprayed across his windshield at impact. The SUV was tossed aside.

But Utah Highway Patrol trooper Ruben Correa and the driver were safe.

“After the collision happened, I immediately felt that everything was all right,” Nelson said. “There was definitely some divine intervention going on yesterday morning.”

He had originally started out on another assignment but was redirected after several of his colleagues called in sick. His train was running late.

If on schedule, he would have arrived at the car about three minutes earlier, before Correa could carry out the rescue on the tracks between Pages Lane and Parrish Lane in Centerville. The car was thrown 30 feet.

A few more seconds of hesitation on Nelson’s part also could have brought on a tragedy, costing Correa precious seconds. But Nelson, who acknowledged he was nervous to speak to reporters, emphasized Correa’s effort, calling the trooper a hero who put his life on the line.

“There’s no mortal danger to myself up in the train,” he said.

In his roughly seven years with UTA, he has experienced close calls with humans but has only collided with wildlife.

“My first day of training, I was told, ‘Welcome to FrontRunner. You’re going to hit something.’ It’s kind of a fact of life with railroaders. It’s going to happen sooner or later,” he said. 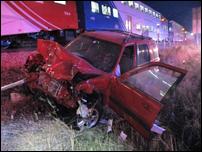 When Utah Highway Patrol trooper Ruben Correa approached a car stuck on the FrontRunner tracks with a train bearing down early Wednesday morning, he knew he had just seconds to get the unconscious driver out of the car.

Some in his line of work quit because the mental toll of a death is too much, he said. After a fatal crash, many panic the next time they spot someone ahead on the tracks and find they are too traumatized to continue in the job, he said.

The engineer has not yet had a chance to speak with the driver, a man in his 20s who troopers say was uninjured and later picked up at a police station by his parents.

“I sure hope that he’s feeling better,” Nelson said.

He and his passengers were uninjured, and inspectors found only scratches and minor damage on the train. Nelson said he will return to work, but he’s currently on administrative leave. He was awaiting a psychiatric evaluation later Thursday.

Authorities say the car veered onto the rails roughly five minutes before it was battered by the train. A resulting chain of calls between emergency dispatchers had not yet made its way to Nelson by the time he hit the brakes.

One dispatcher who had received a report of a car on tracks immediately dialed a hotline for Union Pacific Railroad, which phoned the transit agency at almost the same time Nelson employed the emergency brake, said Bruce Cardon, the commuter rail general manager.

It may have helped for the first call to come into UTA, Cardon said, “but we don’t know that. ... Next time it may be best to call Union Pacific first.“

“After every incident, we do a debrief and we look at every aspect of the incident and ask questions,” he said, like what could have been done differently and if any changes are needed. The agency is expecting to conduct its review within a week, he added.