Expert says flu shot is as effective, important as wearing a seat belt

The Utah Department of Health starts tracking the flu at the end of September and follows it through May, reporting where infections and hospitalizations are occurring in the state.

“Influenza is a big problem. Every year it hurts a lot of people,” said Dr. Andrew Pavia, chief of pediatric infectious disease at the University of Utah and Primary Children’s Hospital.

The highly contagious, vaccine-preventable illness peaks at different times each year, and can even peak multiple times, he said, noting also that it is difficult to predict what influenza will do each year. The only way to protect oneself is to get vaccinated, Pavia said.

“Get your kids and your family a flu shot,” he said. “It’s cheap and it’s easy. It’s one of the easiest things you can do to reduce your risk of disease, hospitalization and death.”

“It’s a lot like wearing a seat belt — a preventive measure that can save your life, even if it’s only 50% effective most years,” he said.

He wants people to know that influenza is quite deadly — it killed nearly 90,000 adults in America last year and 282 children, according to the United States Centers for Disease Control and Prevention. More than 48.8 million people were infected, with more than 22.7 million medical visits and 959,000 hospitalizations during the 2017-18 influenza season.

It’s a lot like wearing a seat belt — a preventive measure that can save your life, even if it’s only 50% effective most years.

“This burden was higher than any season since the 2009 pandemic and serves as a reminder of how severe seasonal influenza can be,” the CDC states.

During a particularly severe flu season last winter, 2,169 Utahns were hospitalized and more than 10,632 cases were reported. Four children died from influenza-related complications in the 2018-19 season, the health department reported. A number of adults also died last year, but because it is difficult to determine it was because of influenza, those numbers are not officially reported.

“You don’t want to be scared, but you don’t want to put it off,” Pavia said, adding that flu shots are offered at multiple locations, including at hospitals, clinics and pharmacies throughout the state.

In Utah, nearly 73% of children from 6 months to 4 years old were vaccinated last year but those numbers drop to 45% by the time they are teenagers, the health department reports.

Pavia is worried that more and more Utahns are too easily opting out of standard vaccination requirements. He said a growing number of people in both affluent and low-income areas of the state are exempting themselves and their children from getting vaccinated.

“It’s really become a big problem, nationally,” he said, adding that increasing number of unvaccinated people contributed to the recent outbreak of measles in the U.S. 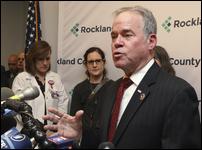 A county in New York City's northern suburbs declared a state of emergency Tuesday over a measles outbreak that has infected more than 150 people since last fall, hoping a ban against unvaccinated children in public places wakes their parents to the seriousness of the problem.

In some places, including in Utah, Pavia said, “it is easier to opt out than to just get vaccinated.”

He said people don’t correctly perceive the risk until someone they know has an immunocompromised kid who gets the flu and is hospitalized or even dies. People of increased risk include young children and older adults, but also pregnant women and people with underlying medical conditions, including asthma, heart disease, lung disease and more.

“A lot of people fall under that classification,” Pavia said. “You never know who’s going to get severe disease.”

Until more efficient vaccines are available, which may happen following President Donald Trump’s recent executive order to study and update the vaccination process, people are advised to get a flu shot every year. Pavia agrees that can be inconvenient for people, but even when the vaccine doesn’t quite match up to the circulating strain, the odds that it will help are good. He said it can cut down on the severity of the illness, at the very least.

Selecting and producing a vaccine that is an exact match, he said, “is an extraordinarily difficult challenge,” as strains change year after year.

“We always anticipate a bad season because flu is always pretty bad even when it is relatively modest,” Pavia said, adding that everyone should get vaccinated against influenza.