SALT LAKE CITY — Rozan Mitchell would like to clear up one thing: Yes, her office really does look at every signature on returned mail-in ballots and compare them against the signatures on voter registration forms.

“People say, ‘Well, you only do a sampling.’ Nope,” Mitchell said, sitting in the Provo headquarters of the Utah County elections office in early September. She is the county’s elections director and, as she’s making clear, she takes that responsibility seriously.

“We check the signature on every single one of those ballots that comes through here.”

That’s how the county discovers instances where, say, a parent has voted for a missionary serving abroad, or a spouse has voted for someone away on business.

“I think people don’t realize the great lengths we go to to do things like that,” Mitchell said.

Supervising elections, a function of county clerks and their staff, is a process very much driven by local entities: states, counties and municipalities. The federal government has laws mandating equal access to the ballot box, but it’s up to local governments to decide how to achieve that goal.

That’s why, even as Congress is expected to approve $250 million for voting security for the 2020 elections, the range of challenges and potential vulnerabilities is large and diverse throughout the country.

Certainly, Utah has unique considerations of its own. But elections officials in Salt Lake, Utah and Davis counties expressed confidence that Utah is taking election security seriously and — though there’s room for future investment and improvement — going about it the right way.

Out with the old

“I think, first of all, it’s important to point out a couple of things that I think the state of Utah has done right,” said Brian McKenzie, Davis County chief deputy clerk. “Number one … the Legislature funded election equipment replacement resources.”

This was to replace aging equipment, a system McKenzie said was “great” but needed to be proactively replaced before any failures occurred. In 2018, the Utah Legislature allocated $4.5 million to upgrade voting equipment.

“The other thing that has come through is the federal government has provided ... some additional HAVA funds — that’s the Help America Vote Act — which the state has used wisely, to also supplement the purchase of additional equipment.”

Federal government grants through this program netted Utah an additional $4.3 million in 2018. So everything from the front-end voting machines to the tabulation systems and the e-poll book, which maintains voter registration information, has been upgraded with state and federal dollars, McKenzie said.

Throw in the fact that vote tabulation isn’t connected to the internet and that every ballot in Utah is either on paper or has a paper backup, and Utah County clerks are satisfied that the state’s vote totals are secure. That said, there are elections-related systems — like the county and state database listing registered voters and their information — that are online and could be potential targets for attack.

“When you hear about the hacking of voting systems, the vulnerability is truly in the database of registered voters,” said Salt Lake County Clerk Sherrie Swensen. She said the lieutenant governor’s office, which is responsible for elections oversight, is keenly aware of the threat and “constantly doing everything they can.”

“They’re very diligent about protecting that database,” Swensen said, “because, if you can imagine, if anything was to hit that database and mess up some of the numbers in the precincts or the list of registered voters, it could create chaos.”

She said her office addressed that concern by paying special attention to the database. In the runup to the 2016 election, for instance, the office constantly checked and rechecked the numbers of voters and their affiliations to make sure nothing irregular occurred, “to make sure that nothing looked wrong, and that it was constantly increasing and coinciding with the number of voters we were adding,” Swensen said.

Bates said Wednesday that number has continued to grow and now sits at about 1.3 billion attempts per day.

Bates said most are for reconnaissance and surveillance, not hacking per se, but Lt. Gov. Spencer Cox said last year the state has partnered with the state Department of Technology Services, Homeland Security, the FBI, the Department of Public Safety, and the Center for Internet Security to guard against serious data breaches.

Cox said last year the state has never had one and remains “ahead of the curve” when it comes to election security.

Justin Lee, the state director of elections at the lieutenant governor's office, said Wednesday that Utah still has not suffered a serious data breach and will take this year's municipal elections just as seriously as any presidential or midterm vote.

"We're just as prepared as we would be for a general election next year," Lee said.

He said the state continues to work closely with the agencies Cox mentioned last year, even hosting Homeland Security personnel for risk assessments and county clerk trainings. He said the state has not found any specific threats regarding the upcoming elections.

“Here’s the irony,” Swensen said. “One of the things that came about with the Help America Vote Act that was passed, is that they required states to go to a statewide (voter) database. And so nobody even thought or worried about hacking at that point in time.”

The law originally was passed in 2002.

“And it is a wonderful thing that we can see if a voter is registered in (both) Salt Lake and Davis county. But it actually kind of — while it’s a great thing — made us a little more vulnerable in that it’s housed, now, in one spot, instead of being spread out throughout the 29 counties.”

“There’s areas where we can always improve,” said McKenzie. “First and foremost would be cybersecurity and training for elections staff.

Swensen, McKenzie and Mitchell all expressed great confidence in the physical security of their ballots, from the polling places to the drop boxes to the storage facilities. Mitchell said her office, since the new Utah County clerk Amelia Powers Gardner started this year, has taken steps to make sure that ballots are more secure and handled by as few people as possible.

For instance, she said, her office sends two staffers to pick up mail-in ballots from the post office every day, thus ensuring that the ballots don’t have to travel in a mail truck and be delivered to her office on a traditional route. “It goes all over the place before,” Mitchell said. “It could have several stops before it reaches us.”

I think (about) the pride we take in the work that we do, that we want to provide a safe and secure election. We want voters to have confidence in the process.

Her office also uses badge access and a strict buddy system to make sure no one is alone with the ballots. Utah County chief deputy clerk Josh Daniels said the ballots and elections equipment are transported from place to place in locked cages as another layer of protection.

Swensen said she’s heard concerns that her voting machines may themselves be vulnerable to physical manipulation. But she said Salt Lake’s polling places have “more surveillance and more security than, I would pretty much bet, any other county in the state of Utah.” 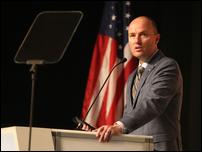 Worried about election security in Utah? Here are 10 things you need to know

In an attempt to answer those questions and be transparent about what the state government is doing to protect the integrity of election results, Lt. Gov. Spencer Cox called the media to a press conference to ask questions.

Mitchell wants voters to know that security is top of mind for election officials.

“I think that voters don’t always realize how much of this is taking place, how much communication and how many security measures there are behind the scenes,” Mitchell said. “I think (about) the pride we take in the work that we do, that we want to provide a safe and secure election. We want voters to have confidence in the process.”

Graham Dudley
Graham Dudley reports on politics, breaking news and more for KSL.com. A native Texan, Graham's work has previously appeared in the Brownwood (Texas) Bulletin and The Oklahoma Daily.