SALT LAKE CITY — Utahns are near the top of the list when it comes to the average cost per dog bite insurance claim.

In 2018 there were 17,000 thousand dog bite claims across the nation totaling $673 million in total claim value, according to the study.

The study comes just four months after a Utah toddler had part of his arm bitten off by a neighbor’s dog. The 4-year-old boy was playing in the backyard of his Layton home when the boy’s mother said one of their neighbor’s two huskies went under their fence and bit the child’s arm off below the elbow. 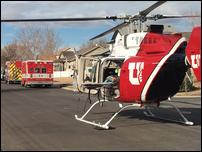 A child in Layton was bitten by a dog on March 3, 2019, and flown to Primary Children's Hospital in Salt Lake City for surgery, Layton authorities said.

News of that incident sparked heated debate about whether the dogs should be put down, and one Utah woman even started a petition to save the dogs’ lives.

Charges were initially filed against the dog’s owners, but were later dropped after the animals were surrendered to Davis County Animal Care and Control.

Children are most at risk for dog bites, and if bitten their injuries can be more severe, the Centers for Disease Control and Prevention says. With the number of dog-owning households on the rise, the CDC predicts dog bite cases will also increase.

Humans who are bitten by dogs can contract diseases such as rabies, Capnocytophaga bacteria, MRSA, tetanus and more, the CDC reports. Information on how to prevent dog attacks and bites can be found on the agency’s website.