SALT LAKE CITY — A bill to incrementally raise the age for tobacco products, including electronic cigarettes, to 21 passed through the Utah Legislature Wednesday with a 15-12 vote in the Senate and a 55-16 concurrence vote in the House.

HB324, sponsored by Rep. Steve Eliason, R-Sandy, changes the age from 19 to 20 on July 1, 2020, and to 21 one year later. The bill raises the age for "obtaining, possessing, using, providing, or furnishing of tobacco products, paraphernalia, and under certain circumstances, electronic cigarettes."

Arguments around this bill has centered on the debate of preemption, with cancer advocates speaking against an early version of the bill. The bill that passed made only one amendment to preemption language in current code, adding the minimum age of sale to what cannot be modified by cities and counties.

Sen. Curt Bramble, R-Provo, the Senate sponsor of the bill, said this compromise would allow cities that have already raised the age for sale of tobacco, including Lehi and Cedar Hills, to keep the age at 21 instead of following the incremental age increase in the state.

"It won't preempt what they've already done. … If they want to be more restrictive on smoking, they can," Bramble said.

In a Senate committee meeting, representatives from businesses and some senators on the committee expressed concerns that not having preemption in the bill would create varying laws across the state.

The bill makes an exception for active members of the military and their spouses. The substitute bill passed in the Senate clarifies that military members can legally possess tobacco — the law previously said they could legally purchase at 18 but did not address possession or use.

Sen. Deidre Henderson, R-Spanish Fork, spoke against the military exception, saying it "befuddles" her to say we don't want smoking under 21 but create an exception.

"I just think if it’s good for them then maybe we should give this decision-making ability to all the adults in the state," Henderson said. 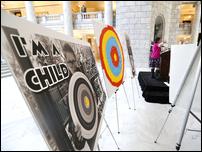 Although the American Cancer Society Cancer Action Network is in favor of legislation raising the age for purchasing tobacco to 21, they used the annual Cancer Action Day to lobby against HB324 because it preempts local laws and penalizes youth.

Senate Minority Whip Luz Escamilla, D-Salt Lake City, disagreed and said it creates consistency for those in service who are moving from one place to another, saying they ask for this type of exemption.

Changing the age for tobacco to 21 has obtained wide support from tobacco companies and health organizations, with statistics showing 95 percent of smokers become addicted before the age of 21, according to Eliason.

A statement from Juul, an electronic cigarette company, says, "Tobacco 21 laws have been shown to dramatically reduce youth smoking rates, which is why we strongly support raising the minimum purchase age for all tobacco products, including vaping products like JUUL, to 21 in Utah."

The bill will now go to Gov. Gary Herbert for his signature.