SALT LAKE CITY — With little discussion, the Senate gave final approval Tuesday to a bill allowing beer with a higher alcohol content to be sold in grocery and convenience stores.

SB132, sponsored by Senate Budget Chairman Jerry Stevenson, R-Layton, now goes to the House after clearing the Senate 27-2. The bill raises the alcohol content by weight from 3.2 percent to 4.8 percent for beer that can be sold outside of state-run liquor stores.

With Utah just one of two states still selling 3.2 percent beer, breweries such as Coors and Budweiser have been phasing out its production and some products are already no longer available.

The only senator speaking to the bill Tuesday was Senate Minority Caucus Manager Derek Kitchen, D-Salt Lake City, who said his downtown area district probably has the largest concentration of microbreweries, who are seeking to preserve the lower limit.

However, Kitchen, who identified himself as "one of the two or three members of this body who actually consumes alcohol," said he didn't like the idea of protecting an industry when other constituents are calling for the change.

"I'm just excited to see us normalize our alcohol a little bit and I think this will be good for the state of Utah," Kitchen said, as well as good for consumers.

Stevenson and other backers of the legislation say retailers are being hurt by the current alcohol limit. But opponents raise concern about the impact of making stronger beer more readily available.

Sen. Lyle Hillyard, R-Logan, one of two votes against the final passage of the bill, said during an earlier debate the higher alcohol content was inviting "trouble," especially among youth. 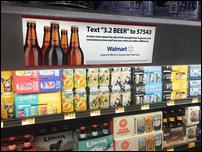 Also voting against the bill was Sen. Todd Weiler, R-Woods Cross, who said in previous debate he had heard from microbreweries worried about the cost of the change.

Earlier this month, The Church of Jesus Christ of Latter-day Saints came out against the bill.

"The church opposes SB132 in its current form. We, along with other community groups, oppose legislation which represents a 50 percent increase in alcohol content for beer sold in grocery and convenience stores," Marty Stephens, director of government relations for the church, said in a statement.