The Republican-controlled body gave preliminary approval to legislation to raise the alcohol content by weight from 3.2 percent to 4.8 percent for beer sold in Utah stores. The vote was 21-8. A final vote will come later this week.

"I contend that responsible drinkers at 3.2 will be responsible at 4.8," said Sen. Jerry Stevenson, R-Layton, the sponsor of SB132.

The state has been grappling with the issue for the past two years as national breweries phase out the production of 3.2 percent beer.

Utah is one of only two states left selling the lower weight beer after laws in Oklahoma, Colorado and Kansas have or will change in the next few months. The proposed law would still leave Utah with the lowest alcohol content for beer.

As state laws change, brewers have to decide whether to continue what would be a specialty item for a shrinking market. Some products from major beer makers, including Coors and Budweiser, are already disappearing from Utah shelves.

"This is a detriment to our retail trade," Stevenson said during floor debate on the bill. The bill would take effect in October if it passes.

The Church of Jesus Christ of Latter-day Saints came out against the legislation earlier this month.

"The church opposes SB132 in its current form. We, along with other community groups, oppose legislation which represents a 50 percent increase in alcohol content for beer sold in grocery and convenience stores," Marty Stephens, director of government relations for the church, said in a statement.

Stevenson said after the floor debate that he would expect the church to oppose the measure but what makes or breaks a bill is the number of votes in the Legislature. 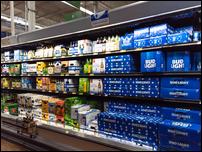 The Church of Jesus Christ of Latter-day Saints came out against legislation Monday to allow the sale of heavy beer in Utah stores.

Sen. Lyle Hillyard, R-Logan, was among those voting against the measure.

"I think the next step will be to put wine in grocery stores. And you say, 'Oh, that's not going to happen.' Mark my words," he said.

Hillyard said allowing stronger beer in grocery and convenience stores would invite "trouble" to Utah, such as young people having access to more potent products.

"I, for one, do not want to expand that into that area. I think people who want alcohol can get alcohol," he said. "I don't care what other states do."

Sen. Don Ipson, R-St. George, said SB132 is a business bill not an alcohol bill, noting the increase in alcohol content in a can of beer amounts to less than a teaspoon.

"The state of Utah is a business-friendly environment, supposedly," he said. "Let's not tie the hands of 3,000 retail outlets by not letting them have the products they need available in liquor sales."

Beer containing 4.8 percent alcohol is legal and already sold in state-run liquor stores, Sen. Scott Sandall, R-Tremonton, said. He said the issue boils down to "not if but where it's sold and consumer choice," he said.

"I think it doesn't have as much moral component to it as some would suggest," he said.

Heavy beers make up about 10 percent of the sales in state liquor stores, but only half of that contains between 3.2 percent and 4.8 percent alcohol by volume, Stevenson said. The change in the law would shift about half of the beers sold in state stores to grocery and convenience stores, he said. DABC, he said, has plenty of other products to take that shelf space.

Stevenson estimated that would slow the growth curve in state alcohol sales from the current 7 percent annually to about 5 percent in the first couple of years.

The retail giant is part of a group of retailers, beer manufacturers and distributors, and trade associations calling itself the Responsible Beer Choice Coalition that is lobbying the Utah Legislature to raise the alcohol content for beer sold in grocery and convenience stores. The group has called the proposed change "modest."

Only 1.8 percent of all beer brewed in the United States is 3.2 percent beer, with Oklahoma consuming 56 percent of it, followed by Utah at 29 percent. Utahns represent less than one-half of a percent of beer drinkers in the U.S.