OGDEN — As the federal government shutdown drags on, about a thousand employees are expected to be called back to work at the Internal Revenue Service center in Ogden, while federal courts have had to stop dealing with some civil cases.

"It's kind of a lottery," said Krystal Kirkpatrick, a spokeswoman for the National Treasury Employees Union Chapter 67, which represents 4,000 IRS workers in Ogden. "There's a lot of nervous people."

Kirkpatrick said the number of employees who'll get a telephone call to come back went up from 337 earlier Wednesday to about 1,000 at the center, which processes tax returns, deals with compliance issues and fields taxpayer questions.

One of the IRS employees set to go back to work, Nic Trujillo, said he has mixed feelings about being called back as of Friday because he still won't be receiving a paycheck until the shutdown ends.

"It's twofold, really, a sense of relief because getting back to work and being a productive member of society, let alone helping taxpayers with their obligations, it's a good feeling," Trujillo said.

But on the flip side, the single father of a 6-year-old autistic son said, "it's going to suck because I know I'm going to work for free. ... How long am I going to be able to get myself to work without having to walk?"

Trujillo said because his son needs daily therapy in Riverdale, continuing to cover the cost of gas for his car without a paycheck is a real worry.

About 1,250 employees at the center — including about 1,000 managers — were already considered essential by the government and have stayed on the job without pay while the rest have been on furlough since the shutdown began Dec. 22.

All of them have already missed a paycheck, and many are looking for other ways to earn money. Kirkpatrick said she's lined up a bartending job in Roy. Furloughed employees can apply for unemployment, but the process can take weeks.

"We've had a lot of questions come up regarding hardships," Kirkpatrick said, with employees contacting the union about how they're supposed to commute to work when they have no money for gas.

"I know they'll get paid eventually, but eventually doesn't fill up your gas tank," Kirkpatrick said. "It's pretty awful to go to work and not get paid. Morale isn't great. Management is there, but they're also not getting paid. They're suffering as well." 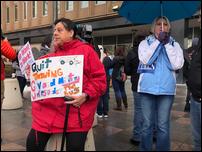 Internal Revenue Service employees furloughed by the federal government shutdown had a simple message Thursday for Washington, D.C., at a rally Thursday outside the James V. Hansen Federal Building.

Her message for President Donald Trump and Congress, who are at an impasse over the president's push for border wall funding to be included in a short-term budget bill, has stayed the same throughout what is now the longest-ever federal shutdown.

"Reopen the government. America deserves a government that is open," Kirkpatrick said. "I'm not big on pointing fingers. I think we're Americans and we should learn to work together because that's what it's about."

The impasse has brought some work in the U.S. Attorney’s Office and federal court to a stop.

U.S. Attorney John Huber, who has discretion to determine essential personnel during a government shutdown, put a dozen attorneys and staff in the civil division on furlough. Meantime, some federal judges are postponing their civil calendars, especially where the U.S. Attorney’s Office is involved, according to Mark Jones, clerk of the court.

Criminal cases, which the office deems essential to public safety and national security, have continued during the lapse in funding. Hearings, sentencings and grand jury proceedings in criminal cases are still being held.

“National security and public safety remain our top priority, and we are committed to not skip a beat in our public service during the shutdown,” Huber said. “Every day of the shutdown, selfless professionals are working without contemporaneous pay to keep our nation and Utah communities safe.”

Jones said the federal courts have funding from case filing fees and carryover dollars from last year to keep them going until Jan. 25.

Ironically, the shutdown has prevented some immigrants in Utah from becoming U.S. citizens, at least for now.

The court canceled naturalization ceremonies this week as well as any activities outside core responsibilities, Jones said.

Other federal entities in the state are also feeling the effects of the shutdown.

On the heals of one of the worst wildfire seasons in Utah history, a group representing federal firefighters warns that people in fire-prone areas might be in trouble this year.

Firefighter training is being canceled, hiring is spotty and preventative measures such as clearing debris is not getting done, said Casey Judd, president of the Federal Wildland Firefighter Services Association.

People, he said, need to take the initiative to protect their “defensible” spaces.

“They basically need to take the position that they’re alone in this for the time being because even if the shutdown stopped tomorrow, the impact of this fire season will be felt for months and months and months,” Judd said.

On Wednesday, the U.S. Department of Agriculture announced it was temporarily reopening Farm Service Agency offices across the country for three days, including 17 offices in Utah.

The move involves 2,500 employees who will staff the offices Thursday, and Tuesday and Wednesday of next week to process a limited amount of paperwork. In almost half of the locations, employees will assist agricultural producers with existing farm loans and to ensure they provide 1099 tax documents to borrowers by the IRS deadline.

Employees may also be available to process payments made by producers by Dec. 31 of last year and continuing expiring financing statements. Information on what locations are open can be found on the agency's website.

More than half of the 67 organizations that responded to a Utah Nonprofits Association survey this week receive some form of federal funding, and nearly 40 percent receive one-quarter of their money from the government. Four plan to cut staffing and one could close if the shutdown continues.

They're worrying about paying their bills, while seeing more need for services and wondering if they will be able to serve everyone seeking help, Kate Rubalcava, Utah Nonprofits Association chief executive officer.

Still, nonprofits are stretching to care for furloughed federal workers.

"I think every one of us are trying to do our part, and nonprofits play a huge role in sustainability of communities and families," she said. "I think we're going to have large implications on our economy should the government shutdown continue."

"Hey friends, because of the (government) shutdown we have over 10,000 furloughed employees that are struggling right now. Many of them are filing for unemployment and may need our help. In fact, the Utah Food Bank has confirmed increased need. Please donate to your local food bank!" Cox tweeted.

Hogle Zoo is offering free admission to federal workers not receiving a paycheck.

"We are hoping it helps alleviate some worry and provides a positive distraction during a difficult time," said Steve Burns, zoo president/CEO "Hang in there!"

One federal worker expressed appreciation for the support federal employees are receiving from businesses, faith communities and community members.

“It’s a very tough situation to be in. It means a lot to have others recognize that and offer assistance,” said the worker, who asked to not be identified.