SALT LAKE CITY — As Utah players and coaches hung their heads in defeat and walked off the field at Sun Devil Stadium Saturday, assistant coach Gary Andersen walked up to quarterback Tyler Huntley, who had his left arm wrapped beneath his warmup jacket, and asked the prognosis.

“It’s over; it’s over,” Huntley said in whispered tones as he fought back the emotion behind what that statement meant.

Andersen came in close and offered him words of encouragement, but what can be said after a season-ending injury to arguably the team’s most important offensive player?

Huntley lingered behind his teammates as they made the long and winding trek back to their locker room, almost as if holding out hope that it was a dream and he didn’t have to face the team with the news, following a devastating 38-20 loss to Arizona State where so much is on the line.

Mark Harlan, Utah’s director of athletics, went beside Huntley and made the slow walk with him to the locker room. Every once in a while, Harlan patted Huntley on the back as a way to console and offer support to the junior quarterback who was hitting his stride before injury derailed his season.

Once again, an Arizona team had taken Huntley out of a game due to injury. This time, though, it came as Utah was on the brink of finally clinching a South Division title, and excitement about the offense was at an all-time high. Now he’s left to watch from the sidelines as he heals from a broken collarbone.

The fate of the Utah offense now rests on the shoulders of redshirt freshman Jason Shelley, whose only minutes ahead of Saturday’s contest came in garbage time when he was just trying to run the ball to wear down the clock. Against Weber State in Week 1, Shelley completed a 40-yard pass to receiver Jaylen Dixon, but that’s essentially the extent of his passing history and display of his ability to the outside world. That's hardly enough time to realize the full potential of Shelley and his ability to navigate Utah’s simple, but complex offense.

Whittingham said his new QB1 was immediately given full reign of the offense when he replaced Huntley on Saturday, and was asked to start “throwing out of the gate.”

“I have a lot of confidence in Jason,” Whittingham said. 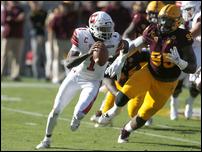 Quarterback Tyler Huntley is likely done for the season after suffering an injury to his shoulder in Utah’s 38-20 loss to Arizona State Saturday.

Shelley completed both passes — a 5-yard toss to tight end Brant Kuithe and a deeper 16-yard toss to Britain Covey.

The drive ended with a 31-yard field goal by place-kicker Matt Gay.

Shelley would finish the day throwing for 59 yards and one interception on 4-of-11 passing in an impossible situation for most quarterbacks to overcome. It’s a situation Shelley described as being “thrown into the fire pretty quick.”

“I just had to step up, and we just didn’t make enough plays when I came in there.”

Whittingham said Shelley has “complete command” of the offensive playbook and is capable of executing the plays in a similar fashion to Huntley.

“He’s very mobile, is a dual threat, and so the offense doesn’t really change much,” he said. “We’ve just got to get him the reps. We’ll give him all the reps with the ones, obviously, next week and go from there.”

And now with a full week of prep as Utah welcomes Oregon to town, the Utes will rely on Shelley’s ability to navigate an offense in another vital Pac-12 matchup. With the South Division title still up for grabs for Utah — pending an Arizona State loss in their last three games — there is little time to develop Shelley for primetime.

As Whittingham put it after the game: “No one in the country or the conference or anywhere will feel sorry for us, so we don’t feel sorry for ourselves. We just move forward, and J’s got to take command and get it done for us.”

Shelley, though, isn’t wavering as he prepares for the rest of the season.

Utah will see how ready Shelley is Saturday at Rice-Eccles Stadium at 3:30 p.m. as Utah plays Oregon. The game will be broadcast on the Pac-12 Networks and ESPN 700.