SALT LAKE CITY — Residents across the Wasatch Front should expect another day of poor air quality due to haze from wildfires burning across the western U.S.

KSL's Air Quality Network forecasts the air to be unhealthy for sensitive groups across Utah's four most populated counties, as well as eastern Utah. The Utah Department of Environmental Quality defines sensitive groups as children and older adults, people who are active outdoors and people with lung disease, such as asthma.

Other counties across the state can expect moderate air quality conditions Friday.

However, some areas of the state have much worse air quality than others. For example, Orem, Provo, Salem, Spanish Fork and West Benjamin in Utah County each reported unhealthy air quality amounts Friday. Spanish Fork reported a 257 score at 9:15 a.m. The threshold for air to be classified as unhealthy is 151 and 257 falls into the "very unhealthy" range.

Meanwhile, crews continued to fight the Coal Hollow and Hill Top fires burning in Utah and Sanpete counties. More than 200 personnel were assigned to the Coal Hollow Fire Friday morning. The fire has burned 17,969 acres since it started Aug. 4, according to Utah Fire Info. 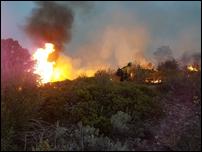 The Coal Hollow Fire in Utah County more than doubled in size and has now burned 17,208 acres as of Thursday morning, with flames higher than Utah's tallest building.

This article will be updated throughout the day with information about Utah's wildfires.