Fire crews have closed additional roads and conducted evacuations in the area, officials said. U.S. Highway 6 was closed in both directions near the fire due to heavy smoke impacting the roadway, but had reopened by 6:30 p.m.

The wildfire is also contributing to dangerous air quality in Spanish Fork as smoke drifts down the canyon, KSL Meteorologist Grant Weyman reported Thursday morning. The Utah Department of Environmental Quality has issued a red alert and is recommending residents in the area to limit all outdoor activities and to stay indoors.

To see the locations and perimeters of some of the fires throughout Utah, visit Mapbox.

Mapbox gathers data from the Geospatial Multi-Agency Coordination and from the agencies and first responders on the ground. There are many variables that can influence a fire's behavior and it can be difficult to accurately map a perimeter, especially during an active fire situation. Not all of Utah's fires are shown on the map.

A map of the Coal Hollow perimeter has been added to the photo gallery below.

Those wishing to check if property is within a fire's perimeter can input the address on Mapbox's website in the top right corner. 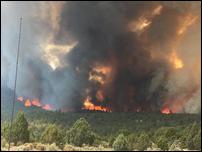 A wildfire on the Uintah and Ouray Indian Reservation that began in late July has now burned more than 2,000 acres as of Wednesday morning, according to officials.

Watch here for live updates on all the fires in Utah.

U.S. Highway 6 reopens after closure due to Coal Hollow Fire

U.S. Highway 6 closed in both directions due to Coal Hollow Fire

Bear Trap Fire on the Uintah and Ouray Indian Reservation