SALT LAKE CITY — The LDS Church and a former Missionary Training Center president asked a federal judge in separate court filings Tuesday to dismiss a Colorado woman's lawsuit alleging the church leader raped her while she was a missionary there in early 1984.

Both the church and Joseph L. Bishop say the statute of limitations on McKenna Denson's claims ran out years before she brought her allegations forward.

"The purpose of statutes of limitations is clear — they are legislative expressions of public policy that encourage potential plaintiffs to bring their actions promptly, before the causes get stale from lost evidence or faulty memories," Bishop's lawyer Andrew Deiss wrote.

"Here, Ms. Denson waited decades to bring the causes of action in the complaint, and they are time barred as a result."

"Thus, any claim Ms. Denson may have had expired over 30 years ago and should be dismissed," he wrote.

Bishop has denied the allegations.

The suit asks for a jury trial seeking damages for loss of earnings and to pay for medical and legal expenses. It also asks that a jury direct the church to change its policies.

Denson claims Bishop is a lifelong sexual predator and that he confessed as much to his ecclesiastical leader in the late 1970s. 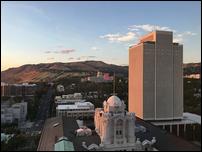 The woman who said the president of the LDS Church's Missionary Training Center raped her while she was a missionary there in 1984 filed a federal lawsuit Wednesday night.

The lawsuit claims Denson made 10 reports about Bishop to various LDS leaders over the years without learning if any action had been taken against him.

Jordan wrote that Denson appears to contend in her lawsuit that although she discovered that Bishop was not a “safe, honorable, and trustworthy” person in 1984, she did not "discover" until December 2017 that the church knew he was a "sexual predator" at the time he was placed in a leadership position at the MTC.

"In short, even assuming Ms. Denson’s allegations are true, she knew by at least early 1984 that, contrary to any alleged representation by (the church), Mr. Bishop was not 'safe, honorable, and trustworthy,'" he wrote. "Accordingly, the three-year statute of limitations for her fraud claim began to run at that time. Thus, Ms. Denson’s fraud claims expired in early 1987 — over 30 years ago."

Denson posed as a reporter last December to confront Bishop, who served as MTC president from 1983-86 and as president of Weber State College in the 1970s. Her allegations became public when a website released their taped conversation and its 76-page transcript.