Down 15 points in the first half of their Mountain West Conference tournament opener Wednesday, the Aggies were looking up at a Colorado State team that beat the Aggies 84-75 in January.

But there was no panic in Koby McEwen.

McEwen poured in a game-high 25 points to go with six rebounds and four assists in leading seventh-seeded Utah State to a win over 10th-seeded Colorado State, 76-65 Wednesday at the Thomas & Mack Center in Las Vegas.

Julion Pearre scored 12 of his 14 points in the first half for Utah State, and Sam Merrill supplied 11 points and three assists for the Aggies, who trailed by as much as 20-5 early in the first half.

“I wasn’t really worried. That’s going to happen in games, and this is the tournament,” McEwen said. “We can’t give up. We’ve got to keep grinding it out. We were getting good shots — we just couldn’t make any.”

McEwen had 21 points the last time the Aggies (16-16) played in the Thomas & Mack Center, an 85-78 win over UNLV on Jan. 7. The Aggies’ second-leading scorer at 15.3 points per game calmly led his team back again after missing his first four field goals.

Anthony Bonner led Colorado State (11-21) with 15 points, and Prentiss Nixon scored 14 for the Rams, who played under a second interim coach following the dismissal of Larry Eustache amid misconduct allegations during the regular season.

But McEwen didn’t stay down for long.

The former Wasatch Academy star had six points and an assist to pace a 14-3 run that tied the game at 30-30 just before Colorado State took a 35-33 edge at halftime.

“That’s obviously not how you draw it up. We were sluggish to start,” Utah State coach Tim Duryea said. “We were flat and had no energy on either end of the floor. They took advantage of that.

“But about halfway through the first half, our defensive activity picked up. It was a rough start, and you didn’t get away with it too often. But we slipped by today.” 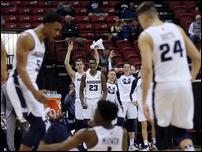 Julion Pearre scored 14 points, including 12 on 4-of-4 3-point shooting in the first half, to help the Aggies to a 76-65 win over Colorado State in the opening round of the Mountain West tournament Wednesday at the Thomas & Mack Center in Las Vegas.

Merrill’s 3-point play just over three minutes into the half gave the Aggies a 39-37 edge. But Colorado State stayed within one possession or less until McEwen’s second trey helped Utah State to a 54-48 advantage with 11:38 remaining.

Brown’s slant that ended with a dunk gave the Aggies a 66-60 advantage with 6:16 remaining.

Utah State finally began to pull away in the final moments. McEwen hit a pair of free throws to give the Aggies a 74-65 advantage with 1:08 left during a game-ending 8-0 run.

@usuaggiebasketball moves to 4-0 all-time in Mountain West first-round with a 75-64 win over Colorado State in Las Vegas. #MWmadness