SALT LAKE CITY — The mother of a Utahn being held in a Venezuelan prison is feeling more hopeful her son will be released after meeting with some of Utah's congressional delegation and White House staff this week.

Laurie Holt, of Riverton, believes a groundswell of support from the public and a new presidential administration under Donald Trump will help to free Josh Holt.

"You don't get in to the White House every day. That was a big step in opening doors to help us get Josh," Holt said.

Her son has lived in a cell in Caracas since June 2016, when authorities there arrested him on allegations he was stockpiling weapons in his Venezuelan wife's apartment and spying for the U.S. Holt has said she believes an assault rifle and grenade were planted there.

Josh Holt's wife, Theresa Calena, is accused of being his accomplice and also is being held.

On Thursday, Holt said her son has written home saying he was losing hope he would be rescued. He recounted the health problems he is facing and detailed poor conditions in the jail.

"He spent his birthday in there last Friday, turning 25," Holt said. "It just needs to come to an end."

Holt says she has Trump's ear. She spoke with national security officers under Secretary of State Rex Tillerson who told her the president has been briefed on Holt's condition several times.

She also visited Sen. Orrin Hatch and Rep. Mia Love. The Utah Republicans told Holt they would do all they could to free the newlywed who fell in love with Calena, his online Spanish tutor. Holt served an LDS mission in Seattle's Spanish-speaking neighborhoods and took online lessons from Calena to sharpen his language skills.

Hatch and Love have criticized the Venezuelan government in the wake of the arrests, calling them political maneuvers by a country known for unrest.

"We are still fighting on a number of fronts for Josh, and I was pleased to introduce Laurie to some of the government officials who are helping us in this effort," Hatch said in a statement. "As long as I’m a United States senator, I will never give up until we see justice for Josh." 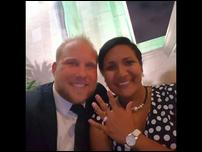 Utah family says their son is stuck in Venezuelan jail

The 24-year-old went down to the country on June 11 and married his fiancée, who is from there, on June 16.

Holt previously voiced her frustration with Barack Obama's administration, saying she did not believe it made her son a priority.

In Venezuela, court proceedings for Josh Holt have been delayed several times. His attorneys said the judge did not show up for court dates.

The newlywed also has reported being ill and malnourished — writing letters home saying he had kidney stones and breathing problems.

"He thinks he's going to be there forever," his mother said Thursday. "Our attorneys have explained that's not the case. There's a lot of support behind hm. I just have to have faith and hope."