LOGAN — As 14-year-old Deserae Turner began speaking again nearly three weeks after she was shot in the head, one of the first things she asked was whether one of the boys accused in the plot to kill her had found his ring.

That ring, supposedly lost in the mud when Deserae allegedly met two teenage boys along a Smithfield canal on Feb. 16, was a ruse to keep the girl in the secluded area until the coast was clear to put a premeditated murder plot into action, Cache County Attorney James Swink said in court Wednesday.

And Deserae's memory of the boy and his ring is proof he was there with the alleged gunman that day, Swink said.

While the blonde teenage boy in the courtroom Wednesday is not accused of pulling the trigger, Swink argued he was an active part of a plan to kill the young girl and just as responsible as the alleged gunman.

First District Juvenile Judge Angela Fonnesbeck bound the case over for trial at the end of Wednesday's preliminary hearing, emphasizing that her decision is not a finding of guilt.

The alleged gunman was ordered to stand trial Tuesday.

Both boys now face evidentiary hearings — May 8-9 for the alleged gunman and May 1-2 for his friend — to determine whether their cases will remain in juvenile court or move to district court where they will face the charges as adults.

KSL has chosen not to identify the teens at this time.

Following the hearing, Deserae's father, Matt Turner, read a statement about his daughter's condition and her family's continued hope for her.

"The prayers of so many have been answered as our sweet daughter is still here with us," Matt Turner said. "We continue to be hopeful for improvements in our daughter's condition. She has undergone a tough surgery and continues to fight for the ability to complete daily tasks many of us take for granted."

He said his daughter began intensive inpatient rehabilitation therapies on Wednesday. Turner urged any parents in the area struggling to talk to their children about this or any other tragic situation to seek free resources from The Family Place, a support organization serving Cache anc Rich counties.

The teen accused of shooting Deserae said he had been messaging the girl on Snapchat, and that he became annoyed by the messages, Cache County Sheriff's deputy Brian Groves testified Wednesday. In interviews with Groves, the teen said he had wanted to stop messaging the girl and told his friend he wished he could just "get rid of" her. 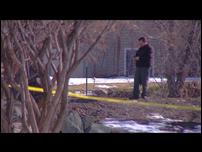 Police testimony: Teens conspired to 'get rid of' 14-year-old girl who was messaging them

The narrative surrounding Deserae's shooting unfolded in a preliminary hearing for the alleged teen gunman Tuesday.

In response, the boy said his friend — the teen who was in court on Wednesday — responded, "Well you've got a 6-inch blade, why don't you do it yourself?"

The first teen said he laughed it off as a joke, but later, his friend became serious when he suggested they actually could go through with it, according to his statement to police.

From there, Swink said, a premeditated plot to kill Deserae Turner formed, a plot that had been in place for weeks when the boys lured her away after school under the guise of selling her a knife.

"That's how this cruel, unsuspecting and terrible act occurred and you heard her testimony she was surprised by that," Swink said as he asked the judge to bind the case over.

The boys had decided to slit the girl's throat, according to prosecutors, but took a gun along as a backup. They are accused of shooting the girl in the head, then leaving her alone in a dry section of canal where she was found hours later by family friends who were searching for her.

The two 16-year-olds also face four counts of obstruction of justice, a second-degree felony, after police say the teens destroyed Deserae's phone and iPod, tossed her backpack in the trash and lied to police.

In his closing statement Wednesday, defense attorney Shannon Demler told the judge the state's entire case hangs on statements by the alleged gunman, who Demler characterized as "a murderer" and "a liar" whose varied statements to police can't be believed.

Even as the alleged gunman began confessing, Demler noted, he insisted his friend was not involved. But when police told him his friend had reported the accused shooter said "he was glad he did it," his story changed to include the other teen in the plot.

"He's a self preserving liar, a murderer who would do anything to keep my client from saying anything bad about him," Demler argued.

While cross-examining witnesses through the day, Demler also emphasized the lack of evidence and witnesses placing his client at the canal that day.

On questions from prosecutors, Smithfield police detective Brandon Muir said there are two people who say the teen was at the scene of the shooting: The alleged gunman, and Deserae herself.

He's a self preserving liar, a murderer who would do anything to keep my client from saying anything bad about him,

In a March 10 interview with Muir recorded in Deserae's hospital room, the girl described what she could recall of being at the canal. It was muddy, she said, and she had gone because the alleged gunman asked her to. She didn't know his friend would be there, she said. She described him as "tall and blonde," and identified both boys by name.

When the girl arrived at the canal on Feb. 16, the alleged gunman told Groves he was to text a single code word, "hey," to his friend so that he would come join him and Deserae. Then, it was up to his friend to give him a look signalling it was time to kill the girl.

For a moment, the teen told Groves, other children could be seen nearby and Deserae went to leave. To keep the girl in the canal until the coast was clear, the boy told Groves his friend pretended he had dropped a ring in the mud and asked the Deserae to help him find it.

The teen also explained that his friend had specifically chosen the knife he would use, a fixed blade KA-BAR knife, while he came prepared with a buck knife, Groves said.

"(He) was holding the KA-BAR in his hand ready to attack her," Groves read from the boy's statement, describing his friend's participation.

However, the teen told Groves he could tell they weren't going to use the knives. Instead, he looked to the other boy for the expression suggesting the time had come.

"I looked back at him, he gave the look and I did it," the teen wrote.

The boy also asked to keep the shell casing from the shot fired at Deserae, the alleged gunman told Groves, taking it home and placing it in his windowsill as a "memento."

After Deserae was shot, the alleged gunman said he watched as the other boy ran over and pulled her backpack off her body. He told police they took the cash inside, then destroyed the phone and iPod with their hands, and tossed the pieces into some water in the canal.

When police asked the alleged gunman why they had taken Deserae's backpack. The boy responded with a single word: "Greed."

Police learned early on from other teens that Deserae may have been in contact with the two teens before she disappeared, including messages the girl sent to another friend identifying them by name.

Through multiple interviews with the second teen, Logan police detective Matt Woods testified the boy had changed his account of that day multiple times. He also claimed he didn't know Deserae, but had seen her once in a grocery store about five months prior, Woods said.

Initially, according to Woods, the teen said he and his friend had played video games that day, first at the alleged gunman's house before heading to his own home to play some more. At one point, they took a break to go get snacks.

Leter, he added that while at his friend's house, the other boy had left for 30 to 45 minutes, Wood said. The teen said he stayed behind playing video games in his friend's bedroom.

When police asked the alleged gunman why they had taken Deserae's backpack. The boy responded with a single word: "Greed."

Meanwhile, the alleged gunman had begun confessing to police, Woods said, claiming his friend was not involved. The boy was released, but was called back the next day when text messages between the boys at the time of the shooting were found.

In those messages was a text from the teen saying, "Let's get this done bro," Woods said. The teen claimed the message refered to him wanting to finish their video game.

The alleged gunman replied, "Yeah man hold on, we clear," to which his friend replied, "OK," police said.

During the interviews, Woods said the teen became increasingly agitated, including flipping off the camera in the interview room, swearing, shouting and at one point throwing a water cup toward the door as the detective exited.

"I asked him specifically if he had planned the murder of Deserae Turner, he said he had not," Woods said.

However, the boy eventually conceded he was at the canal, Woods testified. He claimed at first that the alleged gunman had left while they were playing video games, then called asking him to meet at the canal trail. When he arrived at the trail entry, the boy said he waited, heard a noise like a firecracker, and his friend came walking down the trail carrying a backpack that didn't belong to him.

Woods said the teen then changed his story again, indicating that when he was called to the trail he walked down it to find his friend, arriving in time to see him shoot Deserae in the head when she turned away from him.

Asked why he continued hanging out with his friend after the shooting, and why he didn't call police or go back to help Deserae, the teen said he was afraid his friend would hurt him, and that the girl would be angry with him, Woods said.