PROVO — Adam Steed pulls video up on his smartphone showing men pleading for their lives inside Hama Central Prison, a notorious Syrian prison in the city of Hama.

"These political prisoners exclusively sent their tape to me in an attempt to let the Western world know what was going on," explained Steed.

Through a chance encounter in a Greek refugee camp and social media, the Provo man became the record-keeper of their chilling story and helped orchestrate a plan that most likely resulted in the release of 300 political prisoners, including 20 who were under the age of 18.

"A simple, normal person without any significance in these organizations or places was able to do really significant things just because of simple means," said Steed.

Steed arrived on the island of Lesvos in the fall of 2015, eager to aid the refugee crisis.

"I thought I would help go pass out bananas and help refugees," he recalled.

Instead, he found himself in the middle of life and death.

"My first night, I was walking through the dark with thousands of people everywhere that were hungry and starving."

Steed administered to the sick, helped with boat rescues and collected information.

"I took as much Facebook and internet information of refugees as I could. I just had a feeling that was something I should do," explained Steed.

One of the new Facebook contacts he picked up in the camp was a Syrian attorney who fled Aleppo.

The attorney, who goes by the alias Adam Lutfi, was imprisoned and tortured because he defended people targeted by the government.

"If you did not die of torture, you would die because there was no oxygen," Lutfi said. He then described how hundreds of men were packed into confined spaces with no breathing room. "In the prison, I spent exactly eight months and 13 days."

Lutfi told Steed that he hoped to help other political prisoners now that he was safely out of Syria.

"We started talking and realized we had a lot in common," Steed said. "One of the first conversations he had with me he said, 'Look, Adam, I just think people all over the world have equal rights.'"

As Steed learned more about Syria and the torture occurring within the prisons, he threw out an idea: use social media to document the atrocities.

He told Lutfi, "Let's get all of your attorney friends and let's create a little group, and we get information like any two missionaries who thought the whole world was theirs, but I had no idea that he took me seriously."

But Lutfi did. He had learned that men in the Hama prison were being tortured and feared they would be sent to Saydnaya — a prison Amnesty International described as a "human slaughterhouse."

Volunteers who fly from the United States to join forces with Kurdish troops say fighting ISIS on the ground in Syria amounts to fighting for a cause and a people, not necessarily a country.

"The Hama prisoners knew if they were sent to Saydnaya, they would not come out alive," Steed said.

So, in a revolt, they took over.

"If they make a deal with Assad behind closed doors, he will murder them," thought Steed.

Steed and Lutfi believed their only hope was to get major news outlets to share the story.

"He cares so much about propaganda that he is not going to murder these people with the whole world watching," Steed said. 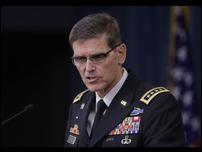 US commander signals larger, longer US presence in Syria

The top U.S. commander in the Middle East signaled Thursday that there will be a larger and longer American military presence in Syria to accelerate the fight against the Islamic State group and quell friction within the complicated mix of warring factions there.

Lutfi was able to contact an attorney outside Hama who had managed to smuggle four cellphones into the prison.

Soon after, Steed was receiving pictures and video, and on May 4, 2016, he posted the prisoners' desperate plight on Facebook and called major news organizations pitching the story. He got nowhere until one of his friends saw his post and contacted her friend.

"I'm trying to get what I think is the major world media, and some guy from this no-name Independent is calling and I'm just blowing him off," remembered Steed.

The Independent — one of Great Britain's largest online newspapers — rushed to publish the story.

The day after the Independent published its article, the New York Times contacted Steed. He also spoke to the BBC and CNN.

Steed can't say for sure whether those articles had any influence on Assad, but "Assad sent a group to investigate and to swoop at the opportunity to look good and negotiate and release prisoners. So those prisoners weren't attacked and killed."

In every war, there are those who fight on the front lines and those who battle silently behind the lines to give voice to the powerless.

"We are not aware of how important we actually are as people," he said. Candice Madsen is a senior producer of Special Projects for KSL TV. email: cmadsen@ksl.com