A federal judge in California ruled Dec. 12 that while the lawsuit against VidAngel is pending, the company must stop streaming.

VidAngel is appealing that preliminary injunction and asked a judge to allow streaming to continue in the meantime. U.S. District Judge Andre Birotte declined to do so Thursday, and VidAngel announced it removed all movies from its service.

VidAngel allows customers to edit videos to remove content such as violence and sex.

VidAngel CEO Neal Harmon says the company is asking the 9th Circuit Court of Appeals to step in. 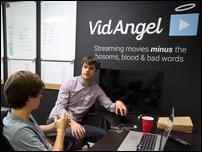 Hollywood vs. VidAngel: A look at the legal battle over the Utah-based streaming service

For families and individuals hungry for a way to edit or filter some of their favorite films, VidAngel came to the rescue. But four major Hollywood studios said VidAngel — no matter how beloved — is breaking the law and sued the company.

Harmon said if the 9th Circuit Court rules in favor of VidAngel, the company expects the filtered video service to return by Jan. 12.

VidAngel will also begin streaming independent licensed films in the coming days while the court makes its decision. Some of the content will include a behind-the-scenes documentary of VidAngel's litigation, as well as a family-friendly stand-up comedy live show.

While the company has its battles, some of its users are also feeling the effects of VidAngel pulling its filtered videos.

Mike Wood, a Spanish Fork resident, said he called the company looking to refund a gift card he received to watch filtered videos he can no longer access. Wood, who said he has been pleased with VidAngel's product in the past, said the company told him the gift card will not expire, but would not give the refund.

"They should not have been selling these gift cards if they knew the probability was going to be that the people weren't going to be able to use any of the credits," he said.

VidAngel, he said, did not even warn when the filtered videos would be unavailable.

"If we're not able to get our movies back up for some reason, then we're going to take care of our customers," he said. "If a customer needs to have a refund, they can't access the content for a gift card, then of course we'll take care of them."

Harmon said most customers have been understanding of the process and are waiting for the court battle to conclude.

"This has been a terrible blow for the hundreds and thousands of families in America who were looking forward to watching filtered content on New Year's Eve," he said.

Disney, Twentieth Century Fox, Lucasfilm and Warner Bros. studios say in their lawsuit that VidAngel circumvents protection measures on DVDs and Blue-ray discs to make unauthorized copies and stream its content to its customers.