Attorneys for John Wayman and Seth Jeffs told a federal judge Tuesday after five months in jail the men now understand what it means to comply with court orders.

But prosecutor Robert Lund argued that the two men are more beholding to imprisoned FLDS leader Warren Jeffs' dictates than to the judge's authority. He said the government has no confidence they will obey court orders given their history of helping conceal Warren Jeffs and obstructing justice.

U.S. District Judge Ted Stewart put Seth Jeffs and Wayman in jail after they met four times last July in violation of a court order to not have contact with co-defendants or potential witnesses in the case.

Warren Jeffs directed Seth Jeffs and Wayman to compile a list of banished former church members to interview for rebaptism. The men met secretly at a Short Creek meetinghouse at 1 a.m. on July 26 and authorities say GPS monitoring shows they met again July 28, 29 and 30.

Seth Jeffs, a brother to Warren Jeffs, and Wayman asked Stewart to reconsider his decision to keep them in jail before trial. The judge said he would issue a ruling Wednesday.

"(Wayman) realizes what it means to be 100 percent compliant," his lawyer Jim Bradshaw said at the hearing.

Defense attorney Jay Winward said Seth Jeffs would be "crazy" to run at this point, given that prosecutors have offered plea deals to the defendants.

"It would be a gift to the United States if he ran," Winward said. "He does not want to give United States any ammunition to not like him or put him back in jail." 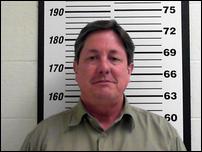 Government prosecutors say Fundamentalist LDS Church members' concerns about losing their eternal salvation because they can't donate welfare benefits to the church doesn't amount to a violation of their religious rights.

Lawyers for both men told the judge their clients committed to call them if faced with choosing between following court orders and Warren Jeffs' directives from prison, including if they're told to flee.

"Do you honestly believe he would call you?" Stewart asked Bradshaw.

Wayman and Seth Jeffs are in jail not because they are a flight risk but because they disobeyed court orders, the judge said. Stewart said he has to decide if something has changed, and it's not going to be an easy decision.

Seth Jeffs and Wayman are among 11 FLDS members charged in February with misusing food stamps and diverting millions of dollars to front companies and buy equipment. They have pleaded not guilty.

A trial is scheduled to start in January but attorneys for both men told the judge they would seek to postpone it, especially if their clients are released.

One defendant, Lyle Jeffs, slipped off his GPS ankle monitor and fled a Salt Lake County home where he was living in June. Authorities have not found him.