WASHINGTON — Utah should enjoy the same status as Wyoming, which is exempt from the presidential designation of any new monuments, and the state's two senators are pushing a bill to achieve that equal footing.

Sens. Orrin Hatch and Mike Lee, both R-Utah, unveiled the Utah National Monument Parity Act on Thursday to prohibit any new monument designation for Utah by the president using authority under the 1906 Antiquities Act.

"New Yorkers would not appreciate it if Utahns came in and told them what they could and couldn’t build in Manhattan,” Lee said, “and Utahns don’t like it when out-of-state special interest groups tell us how to use our land either."

Lee said Wyoming was excluded from the creation of any new monuments in 1950 after President Franklin D. Roosevelt created the Jackson Hole National Monument and Congress passed a law putting Utah's neighbor off-limits for any future declarations.

"Over 50 years ago the state of Wyoming was granted protections from Antiquities Act abuse in their state, and all Utahns are asking is for that same protection to be extended to their state,” Lee said.

Hatch pointed to the nearly 20-year-old creation of the Grand Staircase-Escalante National Monument in Utah by President Bill Clinton, noting how it blindsided the state.

"With this unilateral action, the president defied the will of Utah’s elected representatives and a strong majority of the state’s residents. Today, we are again faced with the threat of a unilateral designation of another 1.8-million-acre monument in southeast Utah," he said.

"Such a designation would far exceed the purpose of the Antiquities Act, which was written specifically to protect special cultural sites and objects limited to the smallest compatible area necessary," Hatch said.

Both senators said the creation of a national monument in the Bears Ears region in San Juan County runs counter to local desires and would constitute an executive branch "overreach" of the Antiquities Act, effectively shutting down debate and circumventing the democratic process.

The Bears Ears Inter-Tribal Coalition, joined by environmental groups, has been pushing the Obama administration for a monument designation for the remote area, urging protection for lands supporters say are vulnerable to looting and vandalism of sacred sites.

The acreage sought for protection is mostly controlled by federal agencies like the U.S. Forest Service and the Bureau of Land Management, although some parcels are school trust lands.

Critics of a potential monument say there are better ways to achieve protection, with both Lee and Hatch pointing to Rep. Rob Bishop's Public Lands Initiative, which received its first congressional hearing Wednesday before members of the House Natural Resources' federal lands subcommittee.

The bill carves out land use designations for 18 million acres in seven eastern Utah counties that were crafted after three years and 1,200 meetings involving elected county leaders, the Utah Farm Bureau, conservation organizations, tribal leaders, sportsmen's groups, the oil and gas industry, and others.

Among its many provisions are the establishment of recreation zones, wilderness areas and the consolidation of certain school trust lands in trades with federal agencies such as the BLM.

At Wednesday's hearing, national BLM director Neil Kornze said the Interior Department could not support the bill as written and offered a litany of changes that would make the legislation more palatable.

Bishop, despite Kornze's criticism, said afterward he is "much more" optimistic that the bill has a chance of passing because the objections raised by the agency and others aren't unexpected — or new.

"I didn't hear any really good complaints," he said, noting his Democratic colleagues on the committee were merely reading "quotes" from groups like the Wilderness Society and the Southern Utah Wilderness Alliance. 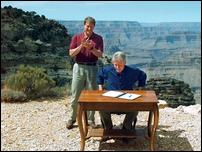 As Utah waits to see if President Barack Obama will designate a new national monument in the state, this weekend's 20th anniversary of another national monument rekindled memories of an event that ignited simmering western frustrations about federal ownership of public land.

Bishop did say he plans to incorporate some technical suggestions raised by Kornze, but any of the director's substantive complaints on wilderness management or disposal of certain federal lands are objections he plans to ignore.

Kornze's testimony said the agency has previously supported legislated no cost public purpose land conveyances, but only after reviews would justify the relinquishment and if appraisals are completed.

Bishop, afterward, said those type of land disposals under the federal agency's purview are lengthy and in many cases, never happen.

"It takes forever. … Those two points means there will never be a transfer. Some of these lands have previously been identified for disposal, but it has not happened."

"His substantive changes are basically to let the agency do anything it wants to and take all of our requirements out," he added. "Everything we are trying to say Congress is now responsible for, he wants all of that removed. We're not going to do that. That is the cause of the problem in the first place."

Bishop's bill will get a markup hearing next week, and he hopes to bring it to the floor after the November general election.

"When it comes to the floor it will be after the election, and I think there will be a whole different mindset from people," he said. "It could make it easier or it could make it more difficult."

Some of the harshest critics of Bishop's land bill say his measure sets conservation back decades and creates wilderness in name only because of allowances made for grazing, motorized access to repair or install water features for wildlife or cattle, and aerial firefighting capability.

Bishop said the congressional establishment of those wilderness areas means they can't be undone by a future president or Interior Department secretary and they receive permanent protection.

"If you are really serious about conservation, my bill does it legislatively," he said.