SALT LAKE CITY — Although the trial for a man accused of murdering a woman and leaving her body on the side of the road is scheduled to begin next month, the investigation is apparently still active, according to recent court filings.

In May, Sergio Briseno Medina, 26, was ordered to stand trial on charges of murder, a first-degree felony, and obstructing justice, a second-degree felony, in the death of Hope Gabaldon, 21, of Herriman.

Gabaldon was found clinging to life Feb. 25 with more than 20 stab wounds, lying on the side of the road on 4000 West near 3150 South. She was taken to a nearby hospital where she later died. After the stabbing, Medina fled to Colorado where he was arrested by U.S. marshals three days later.

An eight-day trial is scheduled to begin Sept. 18.

Earlier this month, a handwritten motion was filed in 3rd District Court that appears to have been filed by Medina himself without his attorney. Medina claims there is video evidence from a gas station that proves a witness was lying when she told police that she picked up Medina, according to his motion.

"Without that video footage to prove my innocesce (sic) and exonerate me my constitutional due process of the law rights have been violated because (the witness') testimony is highly prejudicial and could very well be the determining factor in finding me guilty in a murder case that doesn't meet the standard of proof," Medina wrote in his motion.

In a search warrant affidavit unsealed Wednesday, the witness in question is described by police as a "lifelong friend" of Medina. She claimed that on the night of Feb. 25, she picked up Medina in the area of 2300 West and 4100 South. The next day, she told investigators that she drove Medina to an apartment complex where Gabaldon's Jeep was parked and she watched him pull several items out of the vehicle and place them in a plastic bag, the warrant states.

West Valley police detectives who later found the Jeep found blood samples in the vehicle that were tested and determined to contain "the DNA of Hope Gabaldon," according to the affidavit. 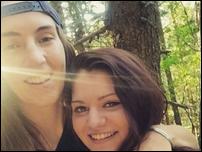 West Valley police announced they located a Jeep that they called a "critical component" into the investigation of a woman killed last week.

The warrant outlines several interviews conducted by police, including one with Argennis Hernandez-Mendez, 20, of West Valley City, and Giovanni Hernandez, 22, of Murray, who were both charged in March with obstruction of justice, a second-degree felony, for allegedly lying to police about the last time they saw Medina.

According to the warrant and statements at a preliminary hearing, Gabaldon had become involved in dealing drugs with Medina and had taken "a larger, more active role in the illicit narcotics distribution."

One witness testified that after Gabaldon's body was found, Medina sent him a link to an online story about her death. When he asked if he did it, Medina replied, "You already know," the affidavit states.

Medina also told investigators that a hitman for a Mexican drug cartel told him he had to kill Gabaldon, but when he refused, he was "going to be shown what happens when he doesn’t follow orders," according to the warrant.

He claimed that when he later saw Argennis Hernandez-Mendez and brother Giovanni Hernandez, one was holding Gabaldon's purse and the other twirling her car keys with his finger, the affidavit states.

The alleged hitman, however, told a different story when interviewed by detectives. He said Medina told him that he "took care of Hope" and "that he used a knife and showed (the witness) the knife that appeared to have blood on it," the warrant states.

On Aug. 5, the Salt Lake County District Attorney's Office authorized DNA testing on suspected blood on a pair of men's boxer shorts, according to court records.