FARMINGTON — A West Valley woman was sentenced to prison Wednesday for her role in a carjacking, part of a spree that killed a recently returned LDS missionary.

Michelle Jenny Vigil, 23, was ordered to spend two concurrent terms of one to 15 years in prison after pleading guilty in June to two counts of robbery, a second-degree felony. One of those charges had originally been filed as a first-degree felony.

Vigil was charged in connection with the first of two carjackings that led to the violent accident that killed Jazmyn Jeppson, 21, in February.

The driver in those carjackings, Anthony Santos Cruz, 28, pleaded guilty in June to murder, a first-degree felony, and robbery, reduced to a second-degree felony. He was sentenced last week to concurrent sentences of 15 years to life and one to 15 years in prison.

Police say Cruz and Vigil forcefully carjacked a vehicle at knifepoint at the intersection of Fairfield and Mutton Hollow roads in Kaysville on Feb. 1 after Vigil stood in the middle of the road to stop the car.

The car broke down on I-15 near Centerville, where a Unified police officer on his way to work stopped to help the couple, not realizing the car was stolen. Police say Cruz walked away from the car and unsuccessfully tried to carjack a vehicle stopped in a freeway traffic jam.

Cruz then carjacked another car, police said, dragging the driver at one point as he continued south on I-15, before speeding through a red light at the Centerville exit where he slammed into Jeppson's car. 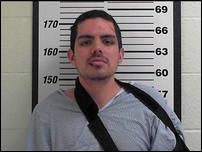 A Bountiful man pleaded guilty Wednesday to murder after crashing a stolen car into a recently returned LDS Church missionary, killing her.

At the time of her death, Jeppson had just returned home to Farmington after serving a mission for The Church of Jesus Christ of Latter-day Saints in Houston, Texas. She had been home less than two months when she was killed.

In a letter to 2nd District Judge David Hamilton this week, Vigil said she takes responsibility for her actions but asked not to be sent to jail. The woman said she was writing because she wanted the judge to see her as a person rather than a case number.

"Your honor, I am a young single mom missing out on my son's important time of life," Vigil wrote. "I really want to be a role model for my son and be someone he can look up to."

Since her arrest, Vigil said she received her high school diploma in jail as well as certificates for addiction recovery programs.