LAYTON — A Layton police sergeant is recovering after his lemonade was allegedly laced with drugs at Subway on Monday, and the restaurant employee suspected in the incident has bailed out of jail.

The sergeant purchased lunch at the Subway drive-thru at 1142 E. state Route 193 about 12:20 p.m. Monday when police say Tanis Lloyd Ukena, 18, slipped methamphetamine and THC, the active ingredient of marijuana, into his drink.

Ukena, who was arrested Monday night for investigation of surreptitious administration of a substance, a second-degree felony, posted $10,000 bail and was released from Davis County Jail on Tuesday morning, jail officials confirmed. No criminal charges have been filed.

The Subway employee told police he had taken the sergeant's order and also filled his drink, but "denied putting anything into the drink," according to a jail report.

Layton Police Lt. Travis Lyman said the sergeant, who has not been identified, has been released from the hospital and was cleared Tuesday to return to work when he is ready. The sergeant has been with the department for eight years, he said.

Investigators say surveillance images from the restaurant show Ukena partially filling the officer's cup before walking off camera and returning to spend "an unusual amount of time getting it ready to deliver to the sergeant."

The sergeant left the restaurant and noticed the drink tasted off, then soon began to feel the effects of the drugs as he was driving, according to a the report.

"While approaching an intersection that had a red light, he had difficulty getting his foot to move to the brake pedal. (He) drove to the Layton Police Department, where he was observed to have signs of impairment. He was unable to process information and drifted off, and was unable to focus on questions being asked of him," the report states. 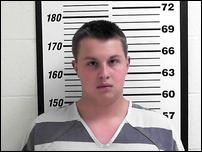 After reaching the police station, the sergeant was taken to Davis Hospital and Medical Center.

Shawn Cook, of Subway Development of Utah, said the company is shocked by the incident.

"Our thoughts are with the sergeant and his family, and we are hoping for a quick recovery. The restaurant owners are working closely with the police in their investigation and will take appropriate action," Cook said, deferring additional comment in light of the police investigation.

Police said Monday the company is cooperating with investigators.

The drink has been sent to the State Crime Lab for further testing, which will identify exactly what substances and how much of them were in the drink, Lyman said. Results aren't expected for several days.

"He doesn't have any tolerance built up for that type of thing, and the way that he ingested it is not the typical way you would take those drugs possibly," Lyman said. "And with all of that combined, he was impaired, so if he had kept consuming that drink, yeah, it could have been very serious."

Ukena has no criminal history with the exception of minor traffic violations, according to Utah court records.