Confusion may be cause of multi-vehicle crash that left 9 injured, police say

6PM: Confusion may be cause of multi-vehicle crash that left 9 injured, police say

5PM: Confusion may be cause of multi-vehicle crash that left 9 injured, police say

5PM: Confusion may be cause of multi-vehicle crash that left 9 injured, police say

10PM: Confusion may be cause of multi-vehicle crash that left 9 injured, police say

Police say they spoke with the teenager who they say caused the accident to find out why he went the wrong direction onto the highway.

Police say the driver didn't even know he was going the wrong way until seconds before the collision.

Police says the confused driver is 16 years old and had another 16-year-old in the passenger seat. The driver was traveling north in the southbound lanes for just a few minutes when he hit a white minivan, carrying a family of seven.

The driver was supposed to turn right on North Mountain View Corridor, but he missed it or didn't see it, and continued about 100 yards and went the wrong direction into incoming traffic.

Police say the focus of the investigation is on whether the driver was distracted or just not paying attention. 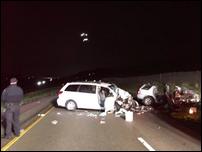 Nine people are injured after a white minivan collided with a silver SUV driving the wrong way on Mountain View Corridor on Saturday night, according to police.

“There were no intoxication issues, there were no otherwise distractions that they could discover, but they had two 16-year-olds in the car, they said it might be more or less inexperience on their part that kind of led to this tragedy,” said Bell.

Police aren't yet releasing the names of those involved, and it's unclear whether the young driver will face charges, but the investigation suggests it was an accident.

“The collision was a tremendous collision and tons of damage was done to those vehicles, but the kids suffered no serious injuries because they were all wearing seat belts,” Bell said.

The two front-seat passengers suffered the worst injuries and are at a hospital tonight.

Everyone is expected to survive.