CHANDLER, Ariz. — The piles of boxes from Amazon reach the ceiling and cover nearly every inch of Hayley Smith's living room.

"This is out of control in a totally awesome way," she explained, taking inventory of the latest daily shipment to arrive at her apartment in Chandler, Arizona.

Smith's nonprofit Lifting Hands International (LHI) received tax-exempt status just four days before the women's conference session, where LDS leaders unveiled the "I Was a Stranger" effort encouraging Latter-day Saint women of all ages to assist refugees in their own communities.

"I was so excited. My heart was just singing," she said.

LHI makes it easy for people to purchase high-priority items on Amazon for refugees around the world, and then they handle shipping everything over to Europe in bulk. "We work directly with NGOs on the ground in France, Greece and Germany to identify exactly what items are needed in the camps," Smith said.

Last fall, Smith raised $40,000 for humanitarian aid and spent two weeks volunteering and translating in refugee camps in Greece. She immediately recognized two big probelms — lots of donations, but the boxes weren't labled. "We were just opening boxes and throwing things," she recalled.

She also said a lot of the donations were not needed and were just taking up precious space. "When people think refugee camp, they think babies and children and everybody wants to help children and so what's happening is a lot of donations are for children.

"Apart from just utter confusion and not knowing what was going on, the most frustrating thing was not having enough resources," remembered Smith.

Now Smith's house is filled with the high-priority items they need like boots, socks, tents, underwear and diapers.

The task of categorizing and organizing all the donations appears daunting, especially after a long day of work at her regular job, but Smith said people in her LDS ward and stake are helping her, and she recently rented warehouse space to store everything until she has enough items to fill a shipping container.

"Just because the news has died down. Just because you are not seeing images of drowned babies on the beach, doesn't mean people aren't suffering just as much," Smith said. 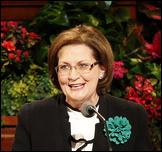 The Church of Jesus Christ of Latter-day Saints released a new website Monday as a way to promote a new relief effort for the women of the church.

Her desire to help the refugees fleeing Syria is personal.

"I started studying Arabic 10 years ago and ended up getting a master's degree in Middle Eastern studies," she said. Smith has lived in several different Arab countries and taught high school Arabic for a few years in Boston.

She said she was overwhelmed by the generousity "and just the feelings of sisterhood and family that I felt there."

"In college I developed an eating disorder and I ended up dropping out of BYU and entering a treatment center for four months for treatment," she said.

When Smith got out of treatment, she found herself slipping back into the destructive behavior and sought out something else to focus on.

"I went to the library and went to the language section, it was the first section and I grabbed a book and the book was an introduction to Arabic letters and sound," recalled Smith. "I knew instantly I had found my passion."

Smith believes a lot of Americans don't understand the horrors refugees are experiencing. "There is just complete destruction and a lot of them have lost family members and friends."

During the current crisis unfolding in Europe, more people have been displaced than at any time since World War II, and though the problems seem insurmountable, Smith knows she can make a difference — with other people's help.

"I think a lot of people think, 'What can I do? There's nothing I can do to fix this problem, it's so big.' And it's true, we can't do much about it as one person, but that is why we do things together," Smith said. "So the power of one as long as we are combined is absolutely powerful."

Smith is returning to Greece next week to volunteer and is also making a documentary about her experience to raise more awareness.